Quarantine, Week 28: Can We Panic Now?

The theme of the week just may be:

Between Trump's efforts to subvert the election are much more exhaustive than we may have thought, North Korea killed a potential defector heading their way because of fears of COVID, one of my teaching assistants has COVID, driving through crowds has become the go-to strategy for the far right with it happening in Los Angeles this week, and Justin Trudeau announced that the second wave is here in Canada, it seems like this was a week where it really seems time to despair.  Good thing we have Dennis Quaid paid by CDC money to cheer us up so that folks don't vote Trump out....

I spent much of the week on a hill yelling that we ought not be focused on the US military regarding the election.  The seizing of power that Trump is doing does not involve the US military but instead involves potentially compliant GOP officials at all levels.  Yep, it is not a coup but an autogolpe.  Think Fujimori and Orban, not Mali last month, Soviet Union 1991 or Vietnam 1963 or Thailand (pick the year, you probably won't be wrong).  This should not be so reassuring as plenty of democracies die by Presidents seizing more power, but it does mean that the effort to anticipate and to fight needs to be focused elsewhere than the Chairman of the Joint Chief of Staff (especially since he only commands the Joint Staff--desk officers).

The good news here is that the Trump Administration can't keep a secret, and seizures of power tend to require secrecy.  Think about all of the effort Chancellor Palpatine put into keeping his plans quiet.  And, yes, rebellions are built on hope, so let's not despair.  Biden is ahead in the polls and is close in states that Trump won bigly four years ago.  The less ambiguous the election results, the harder it is to fake a crisis.  And, yes, autocrats and their wannabe's often lose power precisely by seeking to overturn election results.  There is more good news--the odds of the Dems taking the Senate are increasing as Trump's poisonous policies and stances are spilling over on to them.  The desperation that Lindsay Graham has been exuding reminds me of when I was a teenager seeking romance.  It didn't work for me then, and it may not work for Graham now. 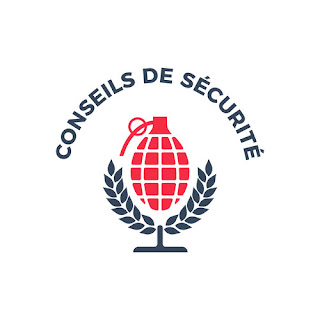 I think we could really use the John Krasinski Good News program these days, but there is good news out there.

The best news: the CDSN has partnered with RAS-NSA, the new Francophone defence and security network, to launch the Conseils de sécurité podcasts hosted by Sarah-Myriam Martin-Brûlé and Thomas Juneau.  Like Battle Rhythm, it is available at all the usual podcast outlets.  Their first episode interviews Canada's Foreign Minister FRANÇOIS-PHILIPPE CHAMPAGNE!

There is delightful Canadian comedian Julie Nolke putting out more videos (she was the one with the great video of pandemic Julie trying to give a heads up to pre-pandemic Julie):

What else?  Oh, I am loving the assignment I gave to my undergrad IR theory class where they create memes illustrating the concepts.  My fave of this week i(it didn't win the weekly contest):

And my TA's, sick and healthy, are doing a great job of working with each other and with Prof. Hornsby (my co-teacher) and myself.   The students themselves seem to be engaged in the material and have not yet commented on my music selections for each video's intro.  So, there's that.

On the homefront, Mrs. Spew finally has a diagnosis for the non-covid respiratory problems she's been having, and she has mostly recovered.  Which means we might return to exploring small towns in the Ottawa region and walk through an occasional park before winter hits in ... oh damn.  Ok, we have a few more weeks.

The baking challenge of last week--smore cookies--required me getting a kitchen torch, so that was a heap of fun!  Turns out the cookies do better with a smidge of broiling than me burning them with a creme brule torch.  Of course, the important thing is that they tasted great.  I shared with my ultimate team and my neighbors--love seeking little kids cover themselves in chocolate--so we didn't have too many ourselves.  A good thing.

The stress-exercising seems to be working to offset the stress-baking and stress-eating.  I have gone through most of the animated Star Wars stuff (Resistance is not that good), so I have to re-watch Mandalorian while tread-milling.  Biking still has a few weeks before winter ends that for me, and the challenge has been a lot of construction nearby disrupting my usual routes.  Still, we have had good weather mostly, so I am making the most of it before the snows come.  The next stress-shopping binge will be focused on beating the crowds to the winter sporting gear--snowshoes and cross country skis.  I will need to get outside during Wave 2 Winter or maybe Wave 3 Winter.

Please focus not on exaggerated threats (the US military) but on the things we can do to make it hard for Trump to stick around--vote and get others to vote.   Do not despair even if you don't see the Dennis Quaid ads, as: