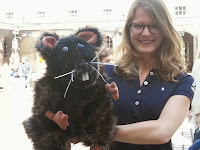 My last day of tourism in Amsterdam before moving onto The Hague for interviews with members of parliament and with military offices was chock full of museums.  I explored the eastern part of the city, which I don't think I did 28 years ago.

Which ones?  The Jewish Historical Museum, the Resistance Museum and the Maritime Museum.

The Jewish Historical Museum was kind of strange.  It had far more security than any other spot in Amsterdam, which is to be expected these days.  But what was strange was the presentation of the materials.  It is within the old synagogue, and is as much a guide to the strange ways of Judaism as to the history of the Jews in the Netherlands.  Maybe it is just me, but it just seemed to be more anthropological (Here is this strange tribe with its strange ways) than historical.  There was nothing disrespectful or anti-semitic--just that the tone was weird to me.

Next door was the Portuguese Synagogue, which was closed.  Most striking about it was the collective of highly armed military dudes.  This was a contrast to Brussels last month since I saw soldiers all over the place.  In Amsterdam, this was the only place I saw guns. 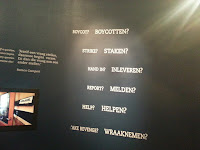 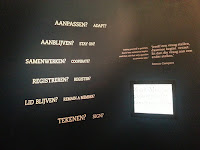 I then went off to the Museum of the Resistance.  It was very well done.  A key theme throughout was that everyone faced very difficult choices as resistance could mean death not just for oneself but for one's village, as careful collaboration to protect one's town (agreeing to be an agent for the Nazi principals but using that authority to mitigate the evil demands as much as possible), as hiding might endanger friends, as fleeing risked getting caught, and on and on. 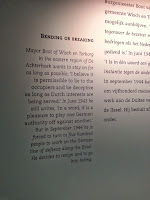 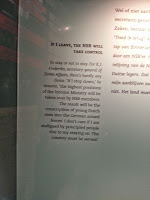 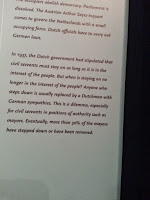 It had a special exhibit on the Dutch victims of Dachau.  All kinds of Dutch folks, from Jews to Communists to Roma and Sinti to Resistance Fighters were sent a variety of places, and many of them ended up in Dachau.  This part of the museum was dark and cold, and contained the stories of a variety of people including those who survived and those who did not.  One of the striking parts of the museum was criticism of the post-war Dutch government for failing to handle the repatriation of the Dutch folks who had been scattered by the war and by the Nazis.

It felt kind of strange to eat at a very nice cafe that was part of the Resistance Museum.  But I guess good food and good beer is a form of resistance to the darkness?

I then went to the Maritime Museum, which mostly featured the golden age of Holland--the 1600s when it was a great power and rival of the British.  Hence all of those paintings of seascapes at the Rijskmuseum on Friday.  It included some videos where actors dressed up as historical figures and talked to the audience about the importance of the sea and of trade.  I especially liked the line: "Rich in their voluntary poverty."  That is, they traded stuff to get stuff to trade and not use.

There was a 25 minute program where a small group would first test their ability to row (it became relevant later) and then were presented in a series of rooms with videos (some surrounding, some not) about various aspects of being on the seas.  The most striking was one where the "ship" we were on  got hit by something and then the girl left alone in her bed on the ship had to be rescued, which she was.  But no parents to be seen.  Sad.  The ship was the Tubantia, which sunk in 1916 by a German submarine.  The Netherlands was neutral during the war, so this was a big deal.  It was strangely depicted in the presentation.  Of course, if I knew of the history, I might have figured things out faster, but it was still a bit unusual.

There was a replica of the Amsterdam, a trading (and then some) vessel.  I have been in similar ships, but none seemed to use rats to get the attention of the kids. 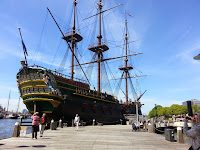 I then walked along the pedestrian bridges across this port area until I got back to the area near the Centraal Station.  Twas a long day of walking and my feet paid the price.  How to reward them?  More Indonesian food for dinner.

The good news is that the number of interviews I will have in The Hague is accumulating so that although Monday (today) is a public servant holiday, the rest of the week should be quite productive.  Now that Dave, Phil and I have hashed out the project, the interviews should be most useful.

Posted by Steve Saideman at 5:32 AM