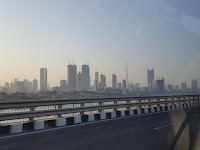 I am in Mumbai, as being on the other side of the world has allowed me to ignore the failure that is the US Secretary of State.   Oops, not so much.  Why am I really here?  Not for research this time.  The Canadian Consulate here has a program that brings in Canadian speakers and has them chat with classes and with think tank type folks.

I got in last night on a wonderfully half empty plane--I could stretch out in my row.  The hotel is super efficient and secure.  This morning I met my contact at the Canadian consulate, and the car we hired weaved through traffic.  In all the places I have traveled, none surpass Mumbai's level of "hell no, I won't drive in this city."  Too many vehicles of all kinds, with few seeming to obey the rules and heaps of chicken games going on.  Pedestrians have heaps of guts here. 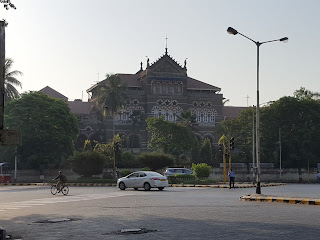 Anyhow, the morning session was with the Asia Society, India.  A very sharp group engaged me in a very interesting discussion after I presented my take on what Trump means for US efforts to foster security in West Asia---not good.  The conversation was wide-ranging as the audience was composed of people with very different backgrounds and interests.  The only real pushback I got was from the diplomat from the Chinese consulate, so mission accomplished. 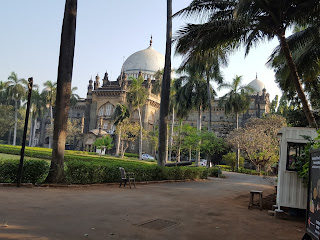 Lunch was with two leaders of the Strategic Foresight Group, and then we had coffee/tea/hot chocolate (the Canadian diplomat!) with a bunch of their staff.  In one day (or I could have just remembered Indira Gandhi), I realized that women have a much more substantial role in India than those in Japan.  Again, the conversation was all over the place with Trump proving to be an effective conversation starter/icebreaker.

I didn't have much daylight for tourism, but will squeeze some in later this week before I fly back. First, I have a couple of classes to teach at U of Mumbai, whose mascot is The Fighting Pacifist.  So, here's my first batch of pics. 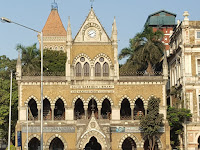 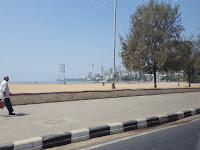