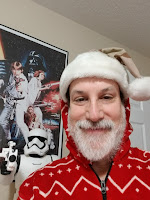 It has been a very strange winterfest.  The last time it was just Mrs. Spew and myself was back in the age of dial-up, when few folks had cell phones (and the folks who did tended to be drug dealers, or so I told one class when a student answered his cell phone).  Even though Hollywood Spew left the nest a while ago, we would see her at my mother-in-law's for the week of shopping, eating, and nagging.

When I watched Wonder Woman 1984 last night (meh), the most moving moment was when WW and Steve walked under the Hirshhorn Museum.

Going to the Smithsonian museums became a father and daughter tradition since probably the year after we lived in DC.  It was fun to chart the changing tastes of my kid as she went from wanting to just see the Natural History Museum every year to relenting and then speeding through the Air and Space Museum to being interested in the history museum to getting into the art museums.  For the past few years, we would switch up the second museum we would see (she loved the African-American museum last year, hated the Native American one the year before because it seemed to her to be too much ignoring the current plight) but we would always stop by the Hirshhorn.  She has a fondness for modern art and so do I.  Seeing Diana and Steve there forced me to pause the movie for a few seconds, as this week also marks the year anniversary of seeing my daughter in person as well as a year since I saw my sister-in-law and the nieces on that side of the family.  And, yes, my sweet hermit of a mother-in-law.

I always enjoyed wandering around the greater DC area because of nostalgia for what little I remember of when I lived there in kindergarten and first grade and for what I remember from my year in the Pentagon and from my summers in the hills to the north at summer camp.  So, much anger and sadness that me and mine are deprived of such stuff.

We did have a zoom holiday party "at" work this week.  A bunch of these folks I have never met in person as we added a faculty member last summer and we have had much staff turnover.  But the highlight was the two-person sweater: 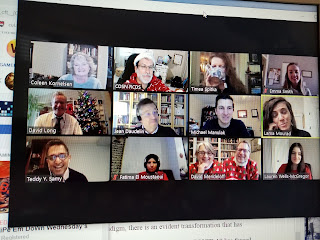 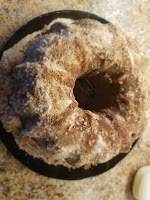 But we are making the most of it.  I spent last weekend distributing the cookies I made thanks to my indecisiveness about which recipes to use.  This weekend is more relaxing (indeed, I have vowed not to do any work this weekend) as I baked only a donut--a bundt donut.  Last weekend's driving around to see friends and acquaintances to distribute cookies was fun and necessary.  Not just to avoid the extra weight if the cookies had remained at home, but I saw more people in person in one afternoon than I had the previous nine months, excepting one July in person meeting.  It really meant a lot to have some contact.  When I dropped off a 1/3 of the donut cake today with my co-teacher David Hornsby, he said he would be hugging everyone he sees at the next major conference.  That might be quite normal ... at least for the first conference or two 😂.

Among the traditions we didn't experience this year: the opening up of lots of presents (my presents were mostly things I bought in sprees of stress-shopping), the fussing over baking in a small kitchen at the mother-in-law's (the fussing would not be mine as I mostly did not cook the big dinner--that was mostly up to my wife and her sister), the poppers pulled by the next gen, the wrapping paper mess, the ritualized restaurants we would visit.  Seeing a Star Wars movie just after it came out... So, what will I do on this non-shopping Boxing Day, the first Boxing Day for which I am actually in Canada ever?  Video games that I have left gathering dust because, well, I suck at them.  Time to get beyond the beach at Normandy, I think.

Enjoy your winterfest and happy new year!  See you in 2021.

Posted by Steve Saideman at 1:08 PM