Going Back to the Start 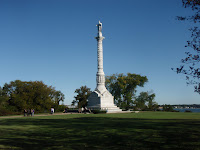 I realized while walking around Yorktown that this is a most suitable place to be towards the end of the Dave and Steve project on multilateral warfare.  Yorktown is only the victory that led to the endgame with the British and produced American independence due to an alliance with France, which provided not only the ships to corner Cornwallis but the siege weapons and doctrine.

I had a choice of Jamestown or Yorktown (not both since I was already spending the rest of the day at Busch Gardens (see next post).  I chose Yorktown due to my fondness for military history.  Given that this project has allowed me to learn more about World War I, World War II, and the military histories of Canada, France, Germany, Britain, the Netherlands, Denmark, and Australia (I don't remember going to a military history museum in New Zealand), it only made sense to go to the starting point of American military history--the revolution. 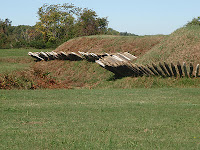 The Park Service has done a nice job of preserving the battlefield.  They had the berms and the trenches in place along with cannons.  The Park Service center had a short film and some information, and an old tent of George Washington's.

The monument was beautiful.  Complete with a real live bald eagle flying nearby.  Really.  Some folks were getting married at the Victory monument.  A very pretty site but strange location except the groom was wearing some kind of cadet uniform.  The monument has three phrases circling towards the middle: One Constitution, One Country, One Destiny.  Of course, that was less ironic than it could have been since it was built in 1880, even though its creation was mandated by the Continental Congress in 1781.


Walking around Yorktown reminded me of how much history is embedded in the place.  The Civil War ran over this territory as well with the Peninsula Campaign.  I also realized about 30 years later than I should have known that one of the carriers playing a big role in the early days of the Pacific, including being sunk at Midway, was named after this battlefield.  Duh, Steve.

I then ventured over to the Yorktown Victory center, which, I think, had some civvie reanctors hanging out, in addition to the center's regular personal, so I took a video (which I will try to upload later) that has two teams of artillery folks--regulars and VA militia.

They didn't seem to know each other well. I learned some history that I should have known--that the US Constitution was the first written constitution?  Really.  I guess so, since the Magna Carta does not count as a constitution (suck it, limeys!).  The words by the renowned scholar Jeffrey Spicoli, PhD resonate louder today:


What Jefferson was saying was, hey we left this England place 'cause it was bogus. So if we don't get some cool rules ourselves pronto, we'll just be bogus too.


One last thing--if you go, definitely take the Colonial Parkway.  The road surface was, what, stone?  Lined by trees until it is along the river/bay.  Just beautiful.

Email ThisBlogThis!Share to TwitterShare to FacebookShare to Pinterest
Labels: travel, us history