When did the risk of denying someone the right to vote become less important than the risk of voter fraud?  How does the GOP get away with its efforts to deny the franchise in ways that are pretty clearly aimed at reducing the voting pool for the Democrats?  Rolling Stone has a great piece here about the actual occurrence of voter fraud.  It basically does not happen.  Few elections turn on a few votes so the incentives, with criminal penalties at stake, mean that it is very irrational to engage in voter fraud.  However, there seems not to be much in the way of penalties to deny people the right to vote.

The funny thing is that the risk equation here--the risk of denying someone the most fundamental right in this or any democracy vs. the unlikelihood that someone is committing fraud--reminds me of the Texas logic that seems to apply--that it is better to execute an innocent person than to let one guilty person spend a lot of time in jail.

The history of vote denial is pretty clear.  Literacy tests, poll taxes, and the rest were all designed to appear to be fair while aiming to disenfranchise Blacks.  Now we have voter fraud as an "issue" because the Republicans see the writing on the wall.  With an increasingly diverse country and with recent and not so recent stances antagonizing Blacks and Hispanics, the GOP realizes that it needs to game the system in order to win elections.  Rather than developing appeals beyond whites, the GOP is trying to make sure that those that they have demonized and antagonized cannot vote.  The reality is that the ID-less are not randomly distributed among the ethnic groups in the US but concentrated among those groups least likely to vote for the Republicans--the very poor and minorities.

So, we should not be surprised that the voter fraud fight gets louder as whites slip into plurality rather than majority status in places like ... Texas.

Again, it comes down to this: if we are going to make a mistake (and we always do as no system is perfect), is it better to deny the right to vote to a person who is a legitimate voter or is it better to let a fraudulent voter vote?  Isn't the presumption of innocence also something that we ought be keeping in mind as well?  Isn't that also basic to our democracy?  Even if there were a voter fraud problem, which there is not, care should still be taken not to disenfranchise those that are legitimate voters.  These laws do not take such care.

See the new piece by Nate Silvers that has good links to existing work and also puts the debate into some perspective on the effects of this stuff.  He argues that the effects are likely to be small at the national level, but I wonder if such efforts matter more at the local level--elections for state representatives and for the House of Representatives.  These elections matter, too, of course, so it might not swing the Presidency, but the injustice here might impact who writes legislation.  Even if the effect is small, the effort here is still utterly reprehensible and fundamentally un-American (even it accords with historical practices such as poll taxes). 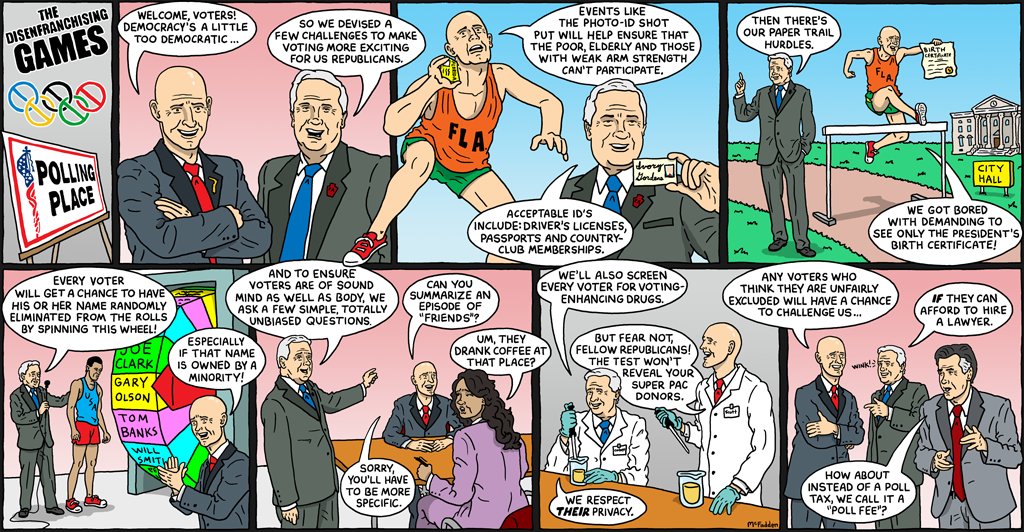 Posted by Steve Saideman at 8:42 AM

Plug for my friends's paper, Barreto, Matt A., Stephen A. Nuño and Gabriel Sanchez. (2009). "The Disproportionate Impact of Voter ID Requirements on the Electorate- New Evidence from Indiana." PS: Political Science and Politics, 42(1): 111 - 116.