Requiem for a Role Model

Every year at around this time, I get very nostalgic.  The beginning of summer marks the beginning of summer camp.  I spent eight years as a camper and three years as a counselor at Camp Airy, an overnight camp in the same range of hills/mountains as the Presidential retreat at Camp David.  For the first two years, I went for the normal period of four weeks.  After that, I was a rare breed--an eight weeker--staying for both sessions, as this place and the people were the best part of my growing up.  I felt far more alive and accepted there than in middle school and high school.  I spent about 44 weeks a year looking forward to those eight weeks.

Airy was where I wrestled with much success (upsetting a series of boys were expected to win the wrestling tournaments several summers in a row), where I first fell in love with the Beatles, where I first acted (see the pic to the right--Ten Little Indians), where I first kissed a girl (the girls camp was eight miles away and we saw the girls about once or twice a week), and where I learned all kinds of things about myself.

This year's nostalgia is bittersweet, as the man who was largely responsible for creating this environment, Ed Cohen, died yesterday.  He was the Director of Airy for my entire time there, and through that role had a tremendous impact on the lives of the boys who went there and the men and women who worked there.  He did most of the hiring, if I remember correctly, and then supervised the counselors and the counselors' supervisors (the unit leaders who organized the activities and such of five or six bunks of kid each).

Ed could appear scary if folks got out of hand, as he was the camp disciplinarian.  I remember one day when the noise in the dining hall was too loud, and he got the mic and told us all to be quiet as the noise was reaching the ceiling.  I was a smartass (surprise) so I looked at the ceiling, and from across the room, he said, "go ahead and look at the ceiling."  The man had superpowers!

I got to know Ed better as I got older, first as one of the senior campers, and then as a counselor.  He was simply the first and best role model I have ever had as a boss and even simply as a man.  He was so generous with his time, his humor, his silliness, his warmth.  I cannot help but think that the place was never the same, that my time at Airy was the golden age because of Ed's leadership.  Of course, the folks who ran the place afterwards grew up and worked in Ed's Airy, so his legacy continues.

Ed had this impact on everyone, as this piece, published upon his retirement, testifies.  I have not seen him for many years, unlike the campers and counselors who resided in the Baltimore area.  I did write him a letter a few years ago and did send him a copy of my first book, as Ed had a winter job as a professor.  I thanked him in that letter and in my message in that book.  I also recently was able to engage him via facebook again.  So, I had my chances to thank him as he had such a huge impact on me, directly and indirectly.  Sure, he scared me that day, but I quickly learned that he was the mensch of menschs, a sweetheart who loved people and was loved by so many people.  Which makes this picture (which I am borrowing from his facebook page) so very perfect. 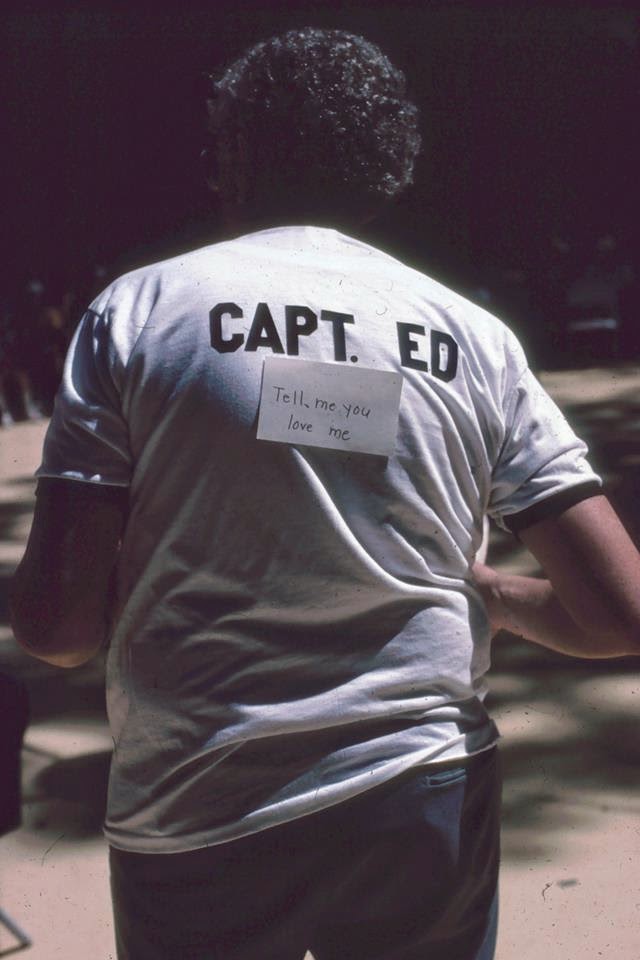 I am pretty sure we did tell you that we love you, Ed.  And we always will.

Steve, you and I don't know each other (I don't think), but we're separated by only a few Airy years. I was a camper from 1982-88, so if you became a counselor in 1984, we overlapped quite a bit. That summer I was in bunk 24 with Dana Washington and Armando (Army) Perez.

That's all prelude to my wanting you to know how much I agree with everything you had to say about Ed Cohen. He was the director during my whole tenure, too. I had the fun of being in many of the Airy plays where Ed often had a great cameo. That was also a great way to get to know the director without having to cross the disciplinary side of him. He was a great man, and I remember him fondly. When I came up to visit camp a few years after my last camper year, he remembered me even though he had hadn't heard a bit from me in that time.

I'm sad to hear about his death. Let's just say that wherever Ed is now, there's already a little less chazzerai there.