Declaring Success at the ISA

Twas a wonderful week in New Orleans for the International Studies Association meeting.  I will follow the example of a wise general and declare success: 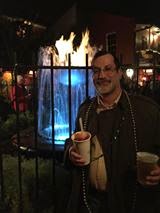 So, yeah, I am very lucky.  I hope the good fortune continues tomorrow as I travel back home.
Posted by Steve Saideman at 11:01 PM

Email ThisBlogThis!Share to TwitterShare to FacebookShare to Pinterest
Labels: conferences