I have written before about my Rummy experiences, but wanted tor revisit after seeing this post yesterday at vox.  I was able to dig through Rummy's website and found the document that spawned a heap of paperwork at my desk on the Joint Staff. 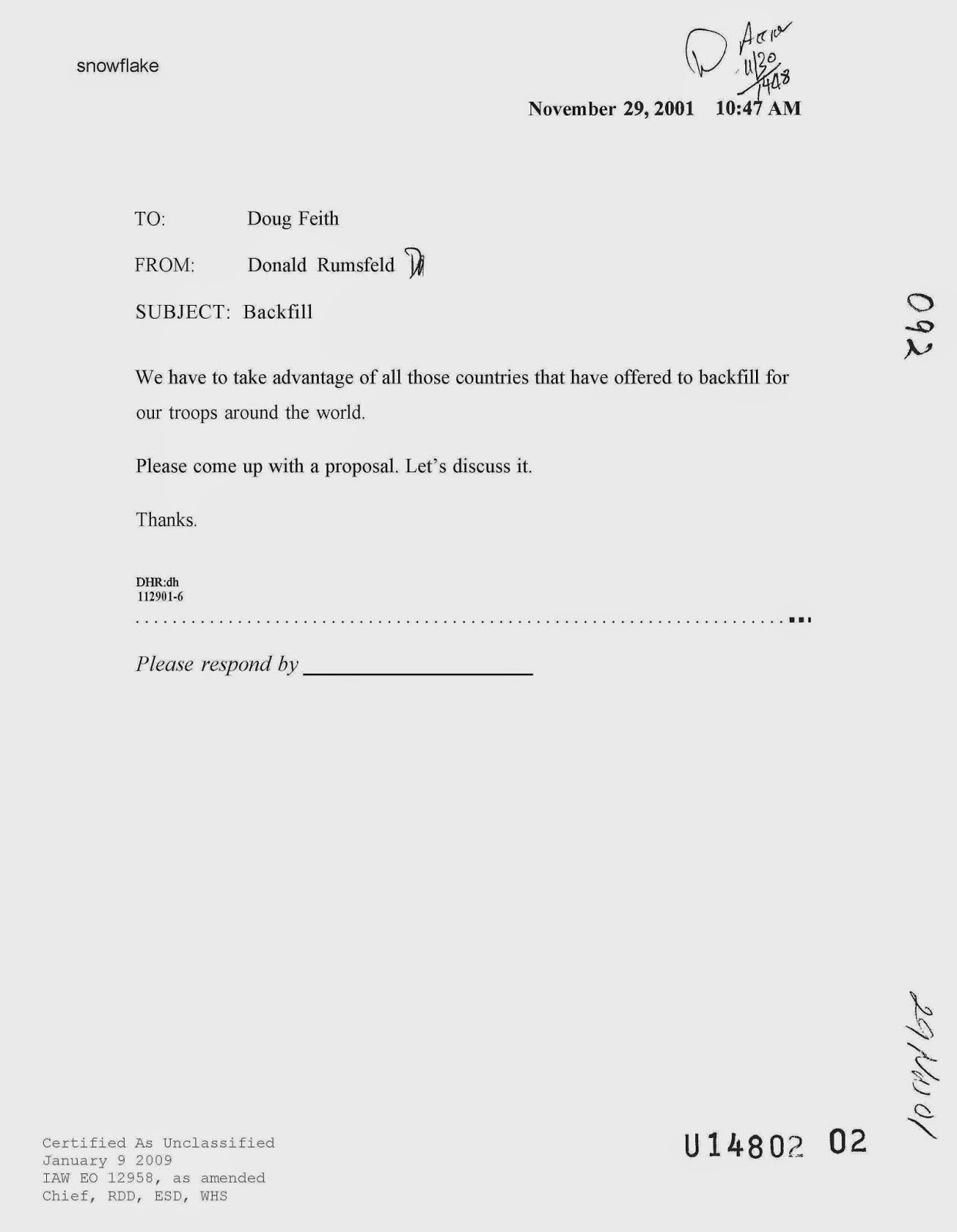 In the aftermath of 9/11, many allies, partners and others offered to help the US, and since Rumsfeld didn't want allies on the battlefield (with a few exceptions), he wanted to use these offers to get the US out of a variety of commitments around the world.  Backfill refers to finding other forces to fill the gaps after one removes one's troops.

I didn't see this snowflake directly, but it produced a memo with a "wishlist" of a number of missions around the world that Feith thought might be good places to withdraw American troops and have someone else replace them: the Multinational Observation Force in the Sinai, SFOR in Bosnia, KFOR in Kosovo, a handful of folks helping out in East Timor, Korea, and on and on.  It listed pretty much every American contingent in a peacekeeping operation around the world as well as many overseas contingents.

I got to be the "stickee"--that I was stuck with it.  Why me?  Partially because Bosnia was on the list and I was one of two guys on the Bosnia desk.  Mostly, I think it was because I was still learning the job and they didn't want to waste the time of a more productive member of the Joint Staff.  Let''s use Saideman on this--he has not much on his plate, and the other folks are doing stuff that will amount to something.  Just a guess.


I did my job, which was to coordinate with the Joint Staff desk officers responsible for these various missions.  Each one came back with basically the same message: nope, not now.  Our troops in place x were part of a commitment that had politico-military equities that still exist--we did mission x for a reason and that reason has not evaporated--so we should not pull these folks out.  For example, I wrote the Bosnia response to the memo directly (the rest I essentially summarized/cut and pasted/plagiarized from the other JS folks), and I probably wrote something about how we made a commitment to our allies, citing the George W. Bush statement: In Together, Out Together.  That we would not leave our allies behind, handling this thing that we helped get many of them into (France, UK, Canada were already stuck in Bosnia in 1994 before SFOR, of course).  Plus 9/11 made Bosnia a bit more relevant for the US since it was a possible vector through which terrorism may flow--some veterans of the Afghanistan campaign who then fought for Bosnia's Muslims settled there.

The memo went up and then was sent back down by the two star Air Force officer above me because of Iceland was not on my list... because it was not on the original memo.  The USAF had a desire to get out of the Iceland mission.  What I learned yesterday is that he was not alone as Rummy had asked Feith shortly after the first request about how to get out of Iceland.  Indeed, getting out of Iceland was one of Rummy's first instincts in the first month after 9/11. It just wasn't on Feith's list that I received initially.

The problem is that the Iceland mission had linkages--to Iceland's support of US Navy operations there.  So, we kicked that can down the road.  Indeed, we, the Joint Staff, said no to all of the items on the list.  As a result, I got to respond to that memo two more times, as Rummy didn't like to hear no, and would push and push until he got the answer he wanted.  I kept giving Rummy through the chain the best "politico-military" advice I could, based on the feedback received from the other JS desk officers.  Our answers did not change during my time.  I have no idea how others responded to it after my year was up.

The only real changes that ultimately occurred were:
The rest? Not much, as far as I can tell.  The US is still in Kosovo and still provides troops to the MFO.

Sure, the memo was not as silly as "Fix Pakistan", but my experience in this process was most educational and not just about Rummy's refusal to take no for an answer.  I also learned a bit about these other missions and about the multilateral inclinations of the US military.  They would rather operate with others, helping them out, knowing that they could use some help some day.  One could argue that the Joint Staff was just status quo oriented, but my sense from the experience was that the JS staffers had a clear vision of the long term interests of the US, one that saw cooperation with allies and partners as a key, dare I say it, enabler/force multiplier.  Ah, you can take the academic out of the Pentagon, but not the Pentagon out of the academic.

Posted by Steve Saideman at 9:22 AM