Twas a wet and windy day for much of Canada, but things dried off so that we could enjoy the festivities.  We have lived in Ottawa for three years, but this was our first time going downtown to celebrate.  Perhaps we were deterred by the crowds and the traffic, but it was well worth it.  It was great to be among so many happy, silly, loud Canadians as they celebrated their country. 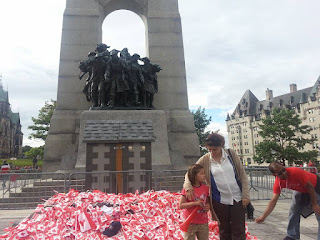 The day had some extra meaning in the aftermath of last year's terrorist attack.  I am pretty sure that this picture is different from one that would have been taken in previous years.  People left their flags to honor perhaps all of Canada's war dead but probably specifically to honor Nathan Cirillo, who was a soldier serving as part of the honor guard for the War Memorial.

Of course, that just made it even more annoying, disturbing, and offensive to see a truck with 9/11 Truther crap and two idiots promoting their racist, ignorant, insulting mindlessness just a few steps down from here.   I have absolutely no tolerance for that crap, and to see folks trying to use this day to celebrate Canada to promote their utter bs pissed me off.  In general, I have little time for conspiracy theorists whose beliefs are not theories but unfalsifiable beliefs.  When it comes to 9/11 truthers, I just have utter contempt. 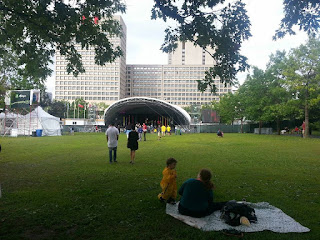 Anyhow, the day got better after that as we watched a concert briefly.  It was in Confederation Park, which is across the Rideau Canal from the National Defence Headquarters (that is what is behind the stage) and across the street from City Hall.  We missed out on the deep fried oreos (they seem to have closed up by the time we got there), but the music was good.

How else to end the night?  Fireworks, of course.  We had a good standing position on Wellington Street and Bank Street.  The young Canadians sang Oh Canada with great enthusiasm, but not well timed with the others singing the same song.  It felt as if the anthem was being sung a la Row, Row, Row Your Boat, as the three or four different groups of singers seemed to have started at different times.  Anyhow, it was a great day to hang out in Ottawa with friends and Mrs. Spew.  I hope you had a great Canada Day.