One of the strangest things I have seen in Canadian politics is that government officials have to go into silent running during election campaigns.  During the 2011 election, I got an additional speaking opportunity at Bridgewater State College near Boston and really near Plymouth Rock) because the Consul General was not allowed to speak during the election campaign.  I found this really strange.

I am reminded of this because I got a phone call as I was in the middle of moving Intern Spew home.  Murray Brewster of The Canadian Press was seeking my views on the reduction in media engagement by the Canadian Forces in the midst of the Iraq/Syria bombing campaign.

My first reaction: was it even possible to reduce the level of media access from the current level of damned little access?

My second reaction was: crap, I have to find a parking spot across the street from my daughter's building.

My third reaction was: war does not stop for campaigns, so it is not clear why basic information about the war should stop.  Yes, the Canadian Armed Forces are essentially government officials, and their declaring of success might be seen as their taking a side in the election (with the party that has cut them deeply and lied about it).  But I didn't find this to be that problematic for a few reasons:
My fourth reaction is: wouldn't the government want this mission in the headlines?  It helps to distinguish the government from the opposition parties; it would give Justin Trudeau more opportunities to embarrass himself; and it would fit the larger pattern of Harper's election strategy of emphasizing fear and the need to rally around the "adult" in the room.

Anyhow, the real lesson as always is that Canadian politics makes me feel like this guy: 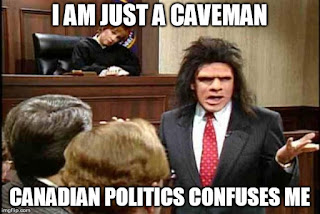