Getting Faster or Just Getting Older 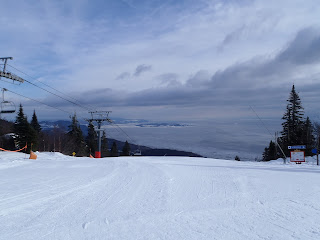 Today, I skied at Massif de Charlevoix.  It is a big mountain on the edge of the St. Laurence River, which often makes one feel as if they are skiing into the river.  The day was surprisingly good--I feared ice after rain at my hotel 60km down the road.  The ungroomed runs were not open, but I am a groomed cruising kind of skier, so no big deal.  The snow was very, very fast, so I was often skiing a wee bit faster than I am comfortable with.  Maybe I am getting older so that my tolerance for skiing super-fast has declined.  Or maybe the hard pack snow was just super quick.  Either way, it was a fast day of skiing.

Not very crowded most of the time and no lift lines.  So, a good day.  A couple of things were a bit odd:
And, yes, I am skiing in the middle of the week--tis Carleton's winter break so I have no guilt.  Tomorrow I present Adapting in the Dust at Laval and then Friday at Bishop's and then maybe a smidge of skiing on Saturday before I come up and see what the big storm did to my neighborhood.

Oh, and I didn't see any moose on the way to or fro despite/because of the special moose fence along the side of the road.
Posted by Steve Saideman at 3:32 PM