There has been a report going around about trends in academic productivity with this graph: 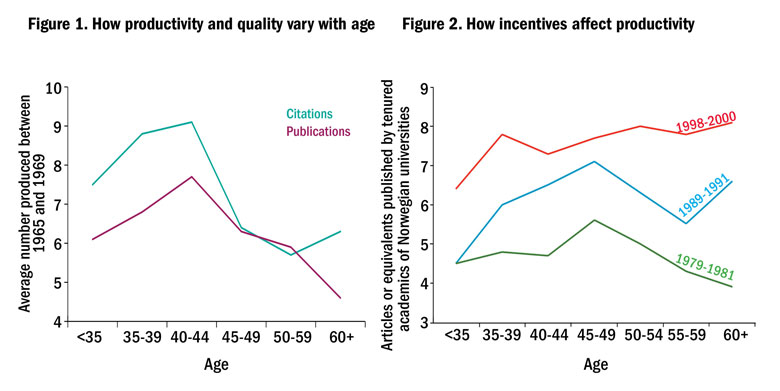 For the story, go here.  I would say that one of the reasons work tends to fall off in the 50s is that folks get more administrative responsibilities (department chair, etc) which makes research harder to get out the door.  NPSIA will be going through some changes in a year, just when I get back from my sabbatical.  So far, it is not clear how the game of musical administrative chairs will play out, but chances are that sometime in my 50s, I will get hit with a major dose of responsibility.

Anyhow, when I saw this graph, my first response, as always, was: what about me?  Am I slowing down?  Am I on the other side of the hill?  So, rather than being productive, I took a few minutes to graph my production over my career: 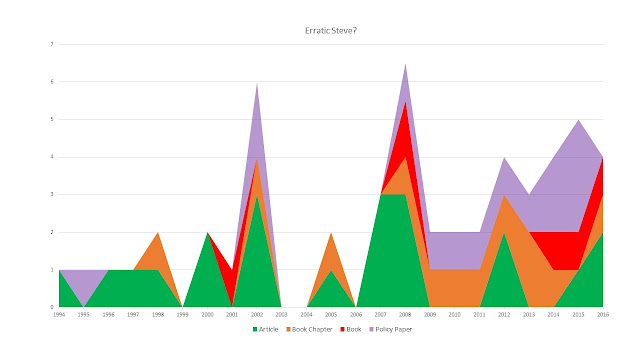 My work tends to be clumpy--with certain years having more stuff come out than others.  The 2002 peak was stuff that was mostly in the pipeline before I went to the Joint Staff, which also explains the 2003 drop.  The 2008 peak reflects the second book, the edited volume (which counts as .5 book for the purposes of this graph), and various pieces.  The more recent peak was stretched from 2014 to 2016 with two books and a bunch of stuff that was spun off of the big NATO project--book chapters and policy papers.  So, the basic pattern is that each major project tends to produce a bunch of work around the time the book comes out with some other stuff coming out in between.

When I started out, I had hoped to produce a refereed article every year, but it has not worked out that way.  The Joint Staff year, as wonderful as it was, did not facilitate research, so it produced quite a gap in 2003-2004.  Since then, in years without articles, I have been able to get other stuff out.

The other pattern is more policy stuff (purple) recently than before.  This is a product both of my blogging and networking as I get asked more often these days to write pieces for policy-oriented outlets.  And since I am at max promotion (there is nothing beyond Full Professor and Endowed Chair besides retirement), I can do stuff that is not as valued by the academic community.  I may not be producing as many refereed articles as in the past, as the article game has become pretty tough and one I enjoy less than the book game.


The patterns thus far do not suggest anything about a drop off happening now or around the corner.  We shall see what how productive I am during this sabbatical.

Posted by Steve Saideman at 4:28 PM

Steve, please, get co-authors the next time you need to make a graph, or learn even the most basic rules of thumb/best practices of data visualization. It's almost never any harder to make a readable graph than a non-readable one.