The Point of No Return?

Today was a bad day for the Trump campaign and a bad day for democracy as Donnie joked/or not about the NRA fans (Second Amendment people) dealing with Hillary Clinton and/or her judges after she wins (because Donnie knows he is going to lose?).  Yep, Presidential candidate incited violence again.  So, is this the point of no return?

What does that mean?  That Trump cannot pivot back?  No, he has no discipline and not much of a learning curve, so that was never in the cards.  I think people are saying essentially that this is too far, that this is beyond the pale, that this is unacceptable.  Once you cross this line, there is no returning to decency, to a candidacy that decent people can support.  Indeed, folks are wondering if this is the point at which Paul Ryan can walk away.  No answer yet as he has mastered the five D's of dodgeball to avoid the many questions today.

But I think people are missing something--Trump crossed the point of no return last year when he announced his candidacy, when he said that Mexicans were rapists.  Ok, sure, one could say even before that since his birther fixation made Trump a racist and a conspiracy theorist and a panderer to white supremacists.  But, if we want to date the time at which his Presidential campaign became so tainted by his utterances, by his policy stances, by his awful Trump-ness, then, well, his announcement will do since it attacked Mexicans and the rest of the Hispanic community by extension.  Oh, and for the GOP, that first move also may help to kill your party for a generation since you embraced it.

That Trump kept then saying stuff and taking stances that seemed to be "new points of no return" kind of misses the point--it is not that these were now the new standards of alienating folks, but that he just went past the point of no return and then just kept going deeper into the land of awful stances, including:
I had to illustrate it thusly: 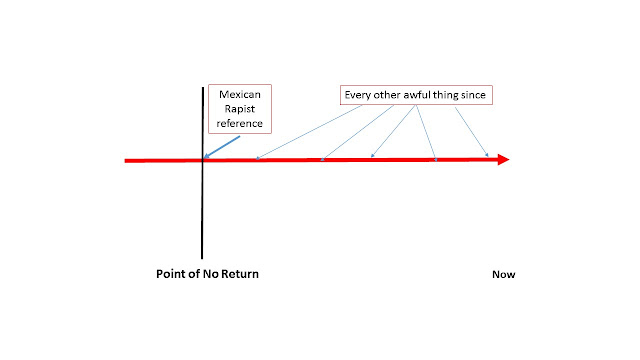 The whole idea of the point of no return is that once you pass that point, you don't return, right?  Well, Trump passed the point of being minimally acceptable last summer and kept on going further and further down the road of hate/fear/indecency/inciting violence.  He ain't coming back.  Once one appeals to white supremacists, that should be it.  Everyone should have run away from him and never looked back.  Yet folks keep needing a new line to be drawn, a new pivot back that .... never happened.  I wonder tomorrow how the craven folks will justify sticking with Trump now that he has passed the latest point of no return.