I spent the last week and a half in Brasilia as part of the large Dave/Phil/Steve project on the role of legislatures in democratic civil-military relations.  It was a very successful trip as I talked to about 25 people, ranging from foreign diplomats to military officers to Deputies (Representatives) and Senators (including one ex-President).  I am perhaps more confused than before about Brazil's civil-military relations as I heard much competing views about how stuff works here.  A foreign defense attache compared  Brazil to an onion, which I then translated into Shrek, and that is probably right.

I found Brazilians to be open, willing to talk and share their views even as I taped the interviews.  I did learn that the Ministry of Defense was wise to me, but I don't really know if it affected the number of interviews I had in Brasilia.  And no one, thus far, is running away from me in Rio (all 12 hours thus far).

As far as Brasilia, it gets much grief for being an artificial capital (created out of nothing, I guess, in the early 1960s).  The design of the city is supposed to look like a plane or a bird, but I only saw rectangles, heaps and heaps of rectangles.  Canberra, another invented capital, is mostly triangles. 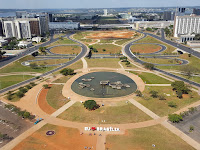 Actually, that is unfair. The center is very linear but some pretty cool buildings around it:


Overall, it was a very successful trip.  I have much clarity now on key aspects of the project as it applies to Brazil and much confusion over stuff that is of much confusion here. Good times.  Seriously, I learned a lot, met interesting people, saw some interesting things, and ate well. I declare success!

Posted by Steve Saideman at 5:51 PM

Email ThisBlogThis!Share to TwitterShare to FacebookShare to Pinterest
Labels: Brazil