Hard Pass: NATO in the Mideast

Trump had a short line in his speech about Iran about more NATO in the Mideast and has even fancied a new name for NATO: NATOME as in NATO in the mideast.

Nope, it ain't gonna happen (which I have said before).  I am currently in Berlin, doing my last bit of fieldwork for the Dave/Phil/Steve project on comparative civil-military relations--what role do legislatures have?  I had an instructive conversation yesterday that made me feel better about my core beliefs on this.  So, first, let me explain my core beliefs and then what I learned yesterday.

NATO operates by consensus, and I think it is damn near impossible to reach consensus on NATO doing much more in the Mideast.  Currently, NATO is running a training mission in Iraq (as discussed by Stefanie von Hlatky in both ep 15 and earlier episode of Battle Rhythm as she visited there for her research).

Why is consensus highly unlikely?  Let me count the ways:
Maybe that was all in my head, a product of my Trump Derangement Syndrome and confirmation bias.  And then I talked with a Bundestag staffer yesterday.  The topic, of course, was mostly the research project, with me asking questions about how the Defence Committee operates in Germany.  But we got distracted by the on-going discussions about Iran--that many politicians could not talk to me this week because they are busy with extraordinary sessions dedicated to the Iran issue.

It was very clear from that conversation that my basic assumptions and assertions are on target here--that it would be very, very difficult to get Germany to agree to support a NATO decision to extend its efforts in the Mideast.  While Germany has opted out of other NATO operations (Libya), this time not only would other countries also opt out, but I am pretty sure they would fight against NATO deciding to do anything in the first place (more like 2003 than 2011).  Don't expect a consensus on NATO doing more. 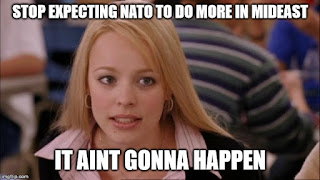 Posted by Steve Saideman at 3:46 AM

Just cause you're paranoid doesn't mean they're not out to get you, and just cause something confirms your biases doesn't mean it's wrong.