Teaching in the Age of Corona, the Continuing Saga

The semester is over for most academics, summer teaching has started for some (sorry, Phil), and now the focus is on what is next.  I have posted before about teaching during the pandemic and ruling out a variety of options.  Shortly after that second post, Carleton put out a report that, well, largely coinciding with my post.  The focus was on uncertainty and concern for the health of students/staff/faculty with the conclusion that almost the entire campus should be online.

Other universities disagree and have put out a variety of plans.  One of my sister's is on a private college's governing board, so she has been sending a variety of plans from a number of places to me. Many of these are ones considered by Carleton's team.  I guess the one that might have been omitted (because US Thanksgiving is later) is starting early and ending in-person early--around Thanksgiving (US).  The idea, I guess is that the travel back from Thanksgiving might expose the campuses to what had been kept off?  The problems with that are, of course, that the students might be the vectors taking the disease from being on campus to being all over the place; and the second wave may hit universities before Thanksgiving, and then what?

My criticisms and concerns has not been focused on getting the classroom stuff but the dorms/dining halls/fraternities/etc.  That is, even if we do everything we can to keep students from transmitting the disease to each other and to profs and staff in the classroom, it will still spread because 18-22 year olds are not going to socially distance rigorously and wear masks all of the time.

I get it that universities and colleges are facing tremendous budgetary challenges, so I am guessing that those most eager to treat things as normal are those that are most exposed.  I think the combo of depending more on provinces and a greater likelihood of the federal government bailing out the provinces makes things a smidge less problematic in Canada than the US.  In the US, tuition is a better component, as far as I can recall, of revenues even at state universities.  States are far more willing to cut and gut universities although a closer look shows that Colorado is not as screwed as I thought.

There is also the question of students getting their money's worth if things go online.  There are lots of ways to look at that.  It depends on how one looks at tuition.  As payment for this semester's courses and nothing else?  As part of one's payment for the four (or more) year experience, which includes courses but not exclusively so?  As an investment in all of that plus the value of the degree, which can rise or fall depending on the long-term situation for the university?  I am motivated, of course, by my own self-interest, but I have thought (such as when McGill was raising tuition just a little bit) that folks should be thinking not just about the price tag today but the value of the degree to them in the long term.  So, a semester or two online may not be quite as good as normal, but, if they are part of the larger process of getting the degree and what comes with it, then one is still investing.

Of course, that probably will not play well to those spending tens of thousands of dollars (another difference between Canada and the US).  So, the priority, I think, must be getting the online experience to be as good as possible, as close to the quality of in-class as possible.

On that, I have good local news.  That Carleton is working really hard to make this work.  By recognizing the reality and shifting resources and driving expectations, Carleton will have a better online experience in the fall than they did this past winter.  The waves of announcements about tools, training, resources, help have been one thing.  This week, NPSIA, my program, had a meeting, online of course, with some of the teaching and learning staff.  I hate meetings, but this one was most productive.  They presented the basic realities of the situation, what tends to work, what tends not to work relative to various class sizes, and they answered questions.  They discussed what help there will be for us.  And, yes, starting to prep early makes a great deal of sense.

What was also very encouraging was not only the turnout among my colleagues, but their deep interest, concern, and curiosity.  Folks were most engaged, asked good questions (well, mostly), and showed a deep interest in getting this right.  The focus was not on fighting the changes, but making the best of it.  I was not only very proud of the university for trying to get this right but also of my colleagues for their dedication and flexibility.

I am lucky in that one of my classes next fall is a PhD seminar that will no more than five students in it and probably less (students can stop taking it if they successfully defend their dissertation proposal).  My other class is a third year undergraduate class of about 90.  That will be quite a challenge, but I happen to be co-teaching it with David Hornsby, who is not only much sharper on flipping classrooms and doing innovative stuff, but he happens to be the Associate Vice President of Teaching at Carleton.  So, he is very much on top of what the various systems can do, has great ideas for how to do stuff well online, and is pretty passionate about this.  So, will I be free-riding on David's efforts?  Well, if I want to teach the students how international relations works, um, sure.  But I have been thinking since this thing hit of strategies and tactics to make teaching work better and hopefully make learning work better.

This spring and summer of zooming with friends, relatives, colleagues, and more is providing some good experience for the fall.  However, since much of what we will do will be asynchronous (recorded, not live), that experience may only go so far.

The key is to have the right attitude, which is: 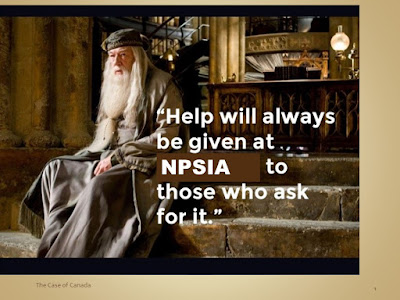 We live in a world of lousy choices, more so than ever.  I am sad about what is likely to happen to a large number of colleges and universities.  The situation for institutions of higher education is dire.  But we can try to make the next semester or two or three (how long? who knows?) as productive and as safe as possible for our students.