Quarantine, Week 26: Half A Year, Halfway?

This week marks the half-year mark since Tom Hanks got the disease and the NBA shut down.  It also marks the week where Trump's stance on all of this became clear--that he was too much of a coward to take this thing seriously.  On the bright side, no deaths in Canada from COVID in the past 24 hours, the first time since March!  While things will certainly get worse before they get better, this is a promising sign.  I am trying to be optimistic--that there will be a vaccine by spring and some kind of normalcy by the end of 2021.

In some ways, it was the most normal of weeks for me.  I got to play ultimate for the first time since early March, and all of my previously injured body parts held up despite our playing two games back to back.  The new rules took some getting used to--more distance when marking the thrower, not yelling the stall count in the face of the thrower, no high fives, etc.  I didn't wear a mask as it fogged up my sunglasses.  But the bubbled league--only three teams playing each other over again with smaller groups on each team--and distancing (my defense has always been socially distanced from the guy I am supposed to cover).

We started the school year at NPSIA with the usual orientation festivities... sort of.  All of it was by zoom.  It was nice to meet the new wave of NPSIA PhD students, who, like MA students, are increasingly diverse.  Phil Lagassé and I met the new MA students who are in our cluster--Security and Defense stuff.  We discussed what our cluster requires (not much except the Econ of Defence/Security class) and then we broke into two groups to chat a bit.  Again, it was an old rhythm with a new, um, set of lyrics.  Don't expect me to make good music references. 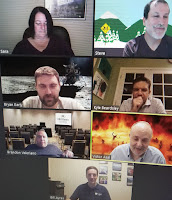 This week was also the American Political Science Association meeting.  It was both normal and abnormal.  It was normal in that folks were getting their papers to their discussants (the person who reads and gives comments) up to the last minute.  I only attended a couple of panels as usual.  Usually, I spend most of the conference meeting up with people--old and new--to find out what people are up to, to connect, and so forth.  This time?  Mostly I was doing my daily grind instead--working on the CDSN stuff, prepping for the new system, readying an article for submission---plus shopping for food and such.  I did have the normal APSA poker game but did so abnormally--online.  APSA managed to do the normal thing of pissing people off--that their proprietary online conference thing didn't work so we all moved to zoom.  So, we spent a lot of money for nothing.  But APSA did move relatively swiftly.  The papers I have read were really interesting and, as usual, energized me to get my stuff out the door.  The younger folks in this business are doing great work, as always.  My incomplete paper with co-authors will be presented this afternooon. So, a mix of similar and different.

Last night, as I was taking out the recycling and trash, I saw that my neighbors will small kids were showing Star Wars on their garage door.  Another neighborhood kid with his kiddie car was there--a drive-in movie!  So, I ducked inside, grabbed my lightsaber (the old super-plastic-y one with two blades as my birthday present has not yet arrived) and Jedi cloak and joined the fray for a few minutes.  I was able to hold off the three younglings but just barely so.  And, yes, I wore my Darth Vader gaiter.

The highlight of the week was the family zoom.  My sister Susan decided that we had enough pandemic and politics talk, so she thought we should play some games.  And when she was describing one of them, she lost it and it was delightful:

While we must remain focused on doing what it takes to win the election and fight the pandemic (those two are inextricably linked), it seems we need to think about other stuff to remain sane.  Six months ago, I said this blog would chart my descent into madness.  Thanks to hanging out with others on zoom--friends from long ago, friends from poli sci, friends from work, and family--I have managed to keep it together most of the time.  I hope you and yours are able to find ways to blow off steam and think about stuff other than Trump and the pandemic.  As my sister was trying to recommend here, perhaps the best thing to do is competitively stuff marshmellows into one's faces.