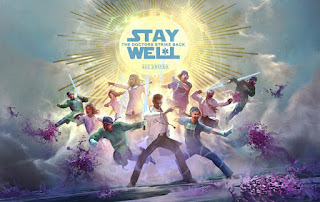 This might be just as much of a pie crust promise (easily made, easily broken) as:

Trump says he may leave the US if Biden wins. pic.twitter.com/XmbtYpNDoh

I have speculated about where Trump might flee to avoid extradition--that Saudi Arabia is a more likely choice than Russia.  But, alas, I am pretty sure Trump will leave the White House (knocking on wood) on January 21st to launch his new network so that he can fleece the true believers until he dies (and maybe beyond).

So, he probably won't flee. But it was a great week of polls.  Doug Jones and Jaime Harrison are essentially tied (within the margin of error), Pennsylvania remains beyond the margin of error, and Trump has to campaign in Georgia since it will be down to the wire in a state he could be taking for granted.  And the voting.  So much voting.  Despite the voter suppression or perhaps, dare I say it, because of attempts at voter suppression, the folks seem determined to vote.  Good for them and bad for the awful people trying to make it hard to vote.  I remember the occasional person pushing back at my discussion of #voterfraudfraud.  Pretty hard to deny that this is the second to last strategy the GOP has.  Of course, the last resort (and the first) is racism/xenophobia/hate.

Of course, let's not get cocky and all that.  I did tweet this morning that I am not expecting the race to tighten.  Why would it?  Trump has never tried to appeal beyond his base.  His base is probably shrinking because he is trying to kill them--via anti-masking stances, his death rallies, etc.  Who is switching now to vote for Trump?  What has he done lately to prove he deserves four more years?  Has he relented on his misogyny?  The only way he can get more women to vote for him is if the men in their lives do it for them.  Which is one way in which his play to have the GOP turnout on election day and not vote by mail works against him--harder for the men to monitor their wives' ballots.  Ooops.  Ok, so I am a bit cocky.

Perhaps it has been because a week of meetings has me juiced.  Really!  I have been re-engaging with the partners of the CDSN, seeking to determine how we can help them, what they need from us, and possible joint ventures.  And it reminded me of why I got into this adventure in the first place--the defence and security community in Canada (and beyond) is chock full of great people, with interesting ideas and important agendas.  I have also met some new people this past week, referred to me by other partners.  The irony, of course, is that I have spent my career avoiding meetings, and here I am reveling in them.  But the pandemic has a way of making one thirsty for contact.

So, my mid-pandemic vow is to return to the habits of April and May and June--organizing zooms to hangout with individual friends and groups of friends.  If we can't beer in person, we can beer over the computer.  It is not ideal, but the zoom world reduces travel costs to zero.  So, that is my renewed survival strategy.  What's yours?