Elections and the Random Academic 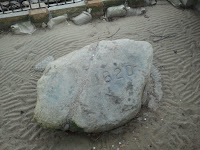 The Canadian election has been both boon and bane.  On the plus side, it means that for a month or so, Canadian officials cannot speak much.  As a result, I got the chance to substitute and be a keynote speaker* for a symposium on Canada and Afghanistan at Bridgewater State University, which has a very active Canadian studies program.  I not only got to stay at a hotel just a block or two away from Plymouth Rock (and closer still to a cupcake place!), but also got to hear some very distinct perspectives on the Canadian mission in Afghanistan.  The experience, including a long drive to and from, got me thinking about a logical next step in my research--writing more extensively (a book?) about the politics and process of the Canadian mission.  There may be heaps of books to come on this topic, but I think I have an angle or two (plus the heaps of interviews over the years) that might be useful.  We shall see eventually whether publishers agree.


*  And yes, despite many talks over the years, this is the first time I think that I was the keynote speaker at a conference/symposium, as opposed to just another panelist.  The fact that they didn't have computer projection set up for me probably worked in my favor, as I had been revising and revising since I arrived so that the talk would be short and focused on the bigger picture.  On the other hand, I think I confused people, especially the Francophones, with the word weenie.  Oh well.

The bane part is that I cannot interview Canadian officials until after the May 2nd election.  I have been invited to give a couple of talks/papers on Canada and Afghanistan, and one really pushes me beyond what I have done before by focusing much more on the civilian side of things on the ground.  This means interviewing folks at Foreign Affairs and at the Canadian International Development Agency [CIDA].  That is going to have to wait until May.


Back to boon, I learned a great deal from Stéphane Roussel's presentation as he talked about Quebec and Afghanistan.  Interesting survey stuff, but also interesting to hear how some myths continue to get play in Quebec.  The most notable one, to me, was that Quebeckers still have the outdated view that Francophones cannot do well within the Canadian Forces.  I found this surprising because I have met so many:
Then again, not so surprising given how hard it is to change attitudes and beliefs--cognitive closure is very real.

These opportunities always end up providing more than I expect.  Given that I have three more guest speaking opportunities in the next couple of months, this is quite a good thing, especially since it helps to ameliorate the family discontent (going back to Australia without them!).
Posted by Steve Saideman at 7:12 AM