Thirty Years of Ultimate: Oh My!

Thirty years ago, I started playing competitive ultimate.  I had played ultimate informally before that--at high school and at summer camp.  In the fall of my frosh year, I took an Experimental College (EXCO) class in ultimate frisbee.  I could have started playing inter-collegiate ultimate that fall, but I waited until spring.  As a result, sometime this month thirty years ago, I began playing "serious" ultimate--first with a college team against other college teams and then on league teams against other league teams with some other kinds of tournaments along the way.

The specific date does not matter, but I am struck by the reality that I have had a longer relationship with ultimate than with my wife.  Sure, I have had periods of non-ultimate in my life (didn't play that much in grad school, hard to find in Texas, no time while in Virginia).

I will always be grateful that the folks playing ultimate when I started did not have the same kind of athleticism as the folks I encounter these days.  I would never have gotten as much playing time ... well, I did have one advantage in 1985 that might have guaranteed it--I had a car that could fit an entire team easily.

Why has ultimate meant so much to me?  Partly because I enjoyed playing a sport I could play well.  Partly because the people involved tended to be silly, sweet, fun, funny, and mighty sharp.  It is pretty telling that in my travels across North America, my friends usually came from two places: my department and the ultimate folks.  Only in Ottawa, my latest stop, has this not applied--I had friends via other sources.  But in Texas, our friends were exclusively from these two groups, and this was largely true in Montreal as well.


Anyhow, I thought I would mark the anniversary by going through the digital pictures I have handy and noting some of the teams and moments along the way.

I have a few pictures of my time playing at Oberlin. This one is handy: 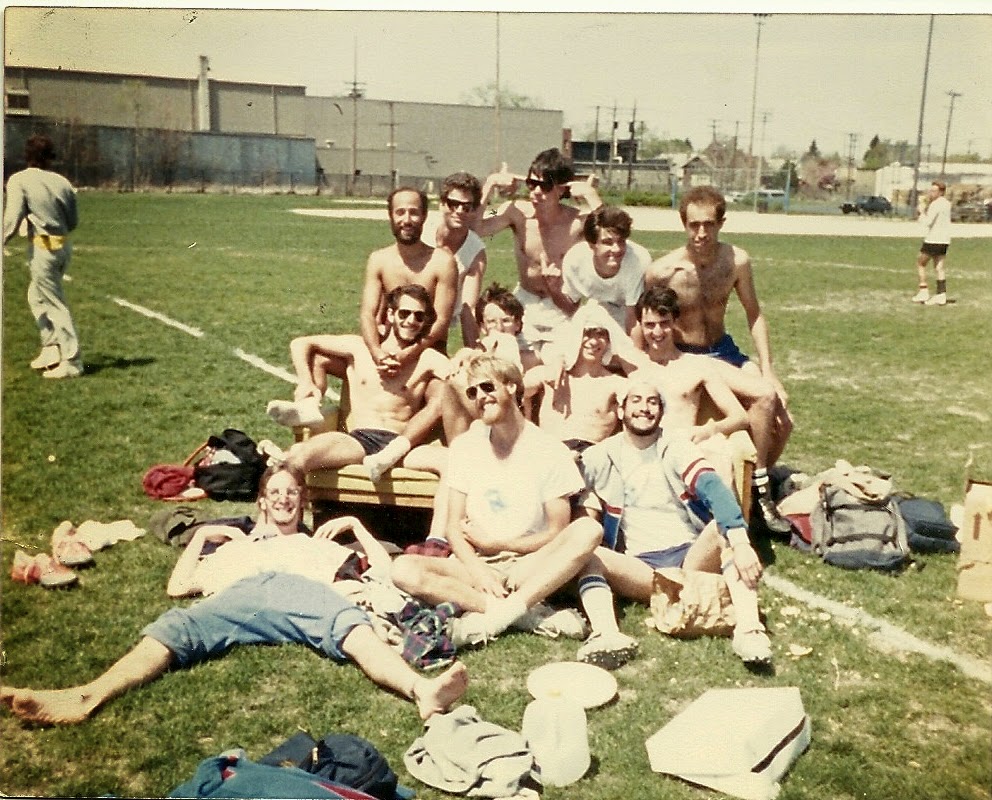 It is on the baked fields of Ann Arbor, Michigan, as we played in the sectional tournament (we only made it to regionals one time during my four years and only because another team that was ahead of us could not make it).  One of my teammates had a couch in the back of his truck, and it was handy on these hard fields.

This picture is of the Lubbock crew (I forget our name), playing in a distant tourney.  All of our tourneys were distant, as there were no other teams in town, and no nearby towns with ultimate.  I didn't play in many tournaments as I had a young kid at home at the time, but I did make it to one in Austin, one in Los Alamos (Atomic Blast--I still have the shirt), and one in Colorado (a costume tourney, which meant I had to get a cow costume that I have kept wearing on occasion [see below]).

In Montreal, I played with a few teams.  I played indoors at first, and found out that the Montreal frisbee community was chock full of silly folks, as you can guess from this picture.  Lindsay made an immediate impression on me.  She was not alone in making me welcome to this vibrant frisbee community.  I played ultimate three to four seasons a year for ten years, even as some of the winter leagues (displaced by youth soccer) required a 45 minute or more drive on late winter nights to get to the field.  Only at the end, with the league growing so big with so many games being played off the island, with resulting rush hour driving through the choke points, did I start shedding my ultimate commitments. 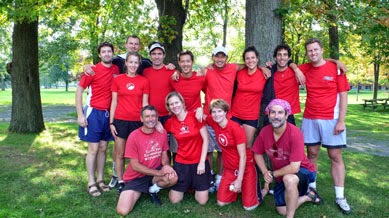 Still, the teams I played with made quite an impression.  I played with BMFHard, which stood for Break Force, Mark Hard.  I could only do the former, not so much the latter.  But the team did let me indulge in my favorite throwing tactic, which is throwing to the side of the field the defense was seeking to deny me.   I didn't always see eye to eye with my captain, but Bobby did teach me a lot about tactics and strategy.  As a result, like Bill Belichick, I seek to start on offense in the second half. 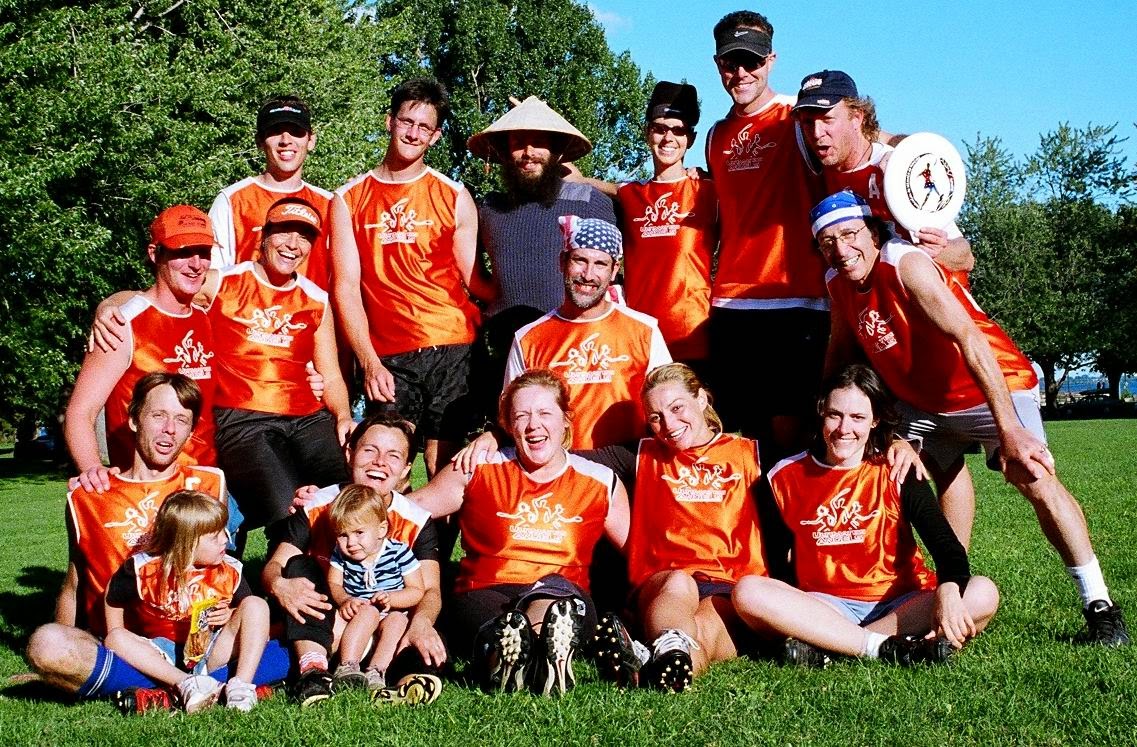 I played several seasons with Ultimate Angels.  A very silly team indeed.  A largely Francophone team that tolerated/made fun of/welcomed the unilingual guy.  After all, he provided some company to the oldest players on the team (yes, UA was one of the few teams after college where I was not the oldest player).
This pic was from one of my last seasons with UA and shows an old man to old man pass as Mike K was one of the few players with whom I played with and against in Montreal who was older than me.  He was also much fitter... damn it.  This also shows that I can run and cut long, something that surprised many teams since I tended to hang back and be one of the handlers (qb/point guard)

Playing with the Grandmaster's team of Montreal, Olde Ville (or something like it) was a pleasure and an honor.  And beer from a championship cup is delightful. 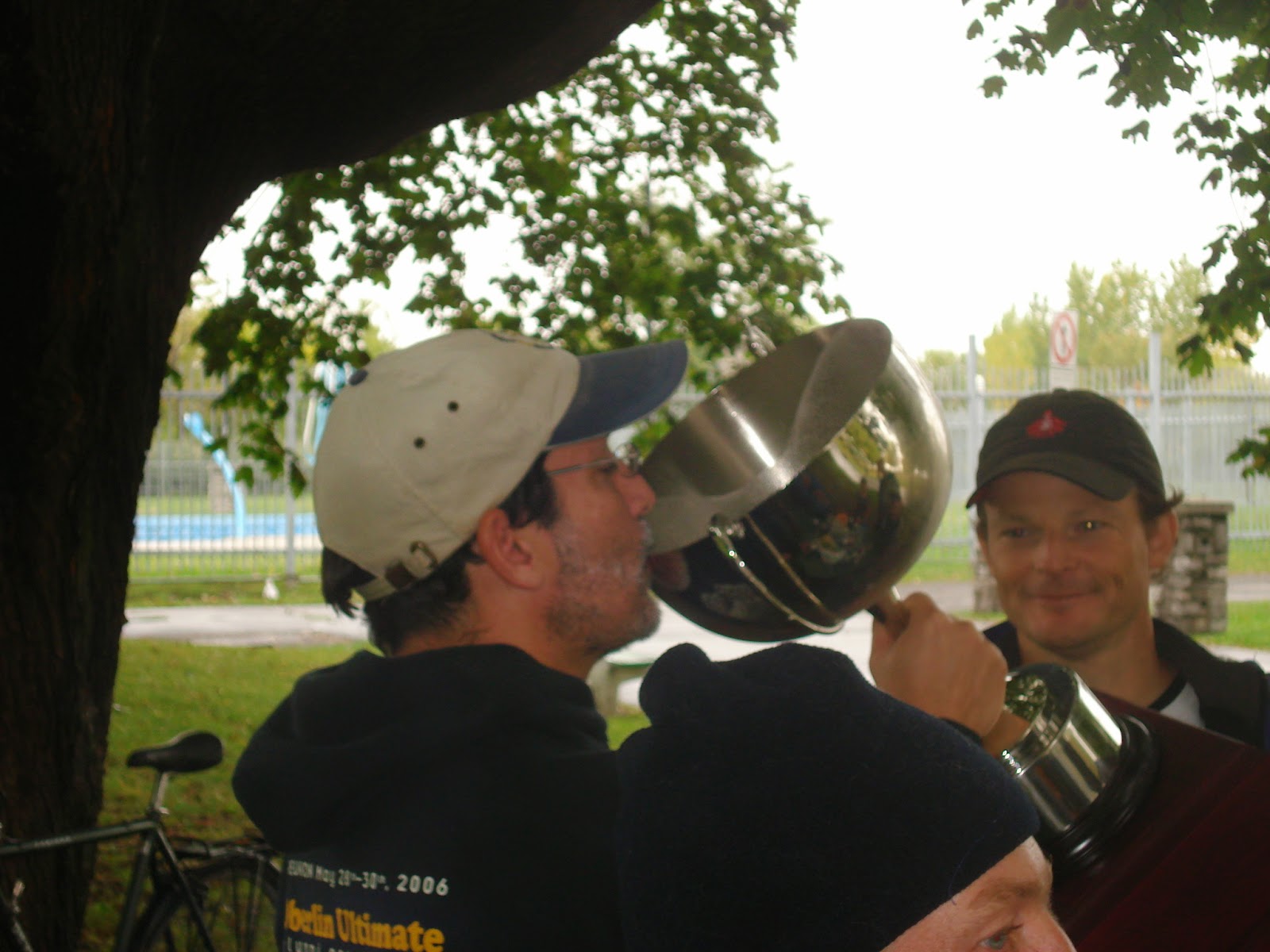 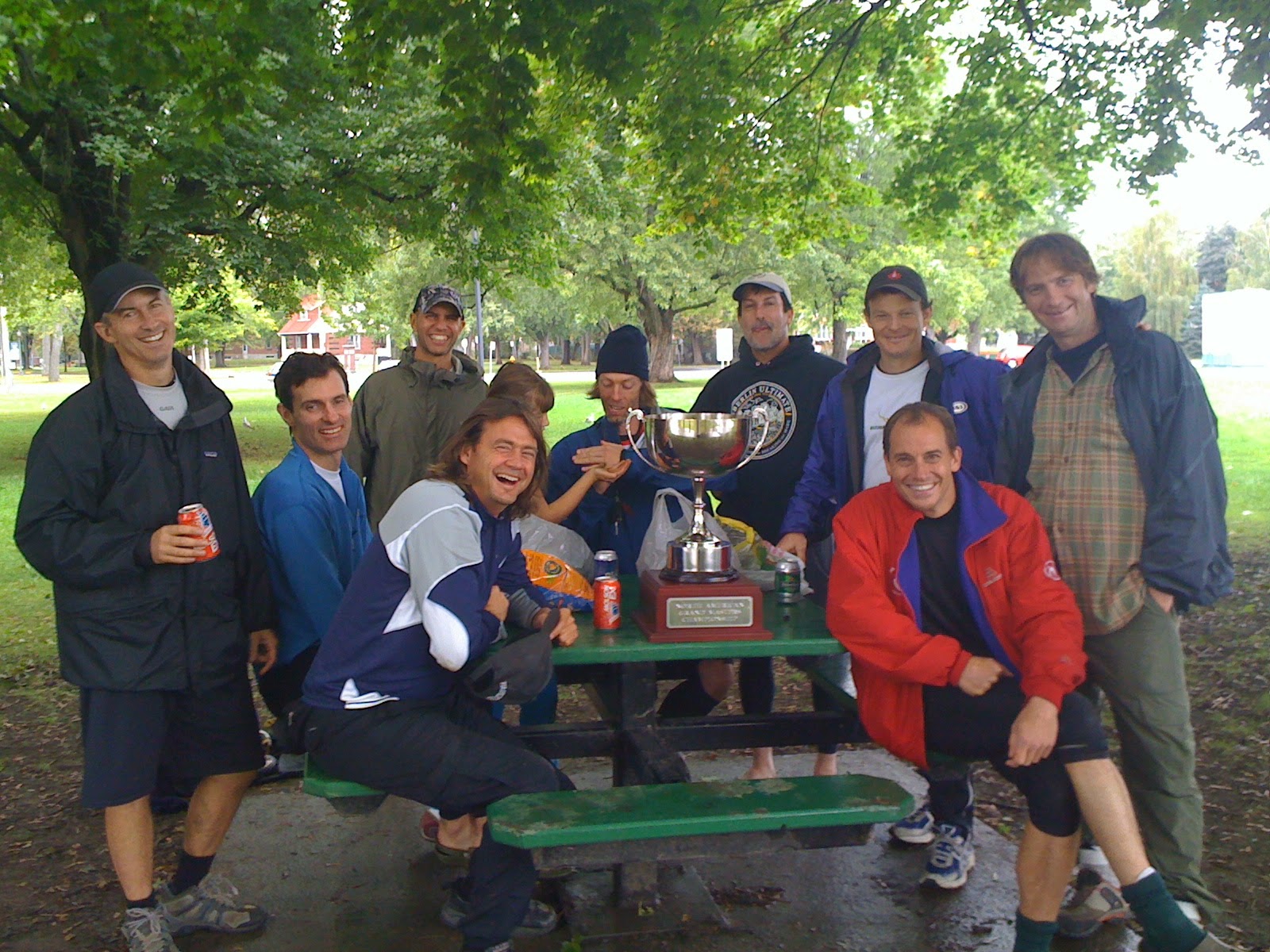 In my entire career, one team stands out: General Admission.  I played steadily with them in the fall and spring every year as we helped to take over the  Concordia frisbee league.  Eventually, they developed a winter league, and I joined GA in that as well.  The team was so much fun, with so much silly, so much good ultimate, and just terrific people.


I was so very touched when they threw me a surprise game on my way out of town.  The pictures here are from before and after that game.  I laughed a lot that evening.  Not just GA players but also those whom I played against over the years.


It was great to go back to Oberlin for various Reunion games including the 30th anniversary of Ultimate at Oberlin.


I have had fun bringing ultimate to the International Studies Association! 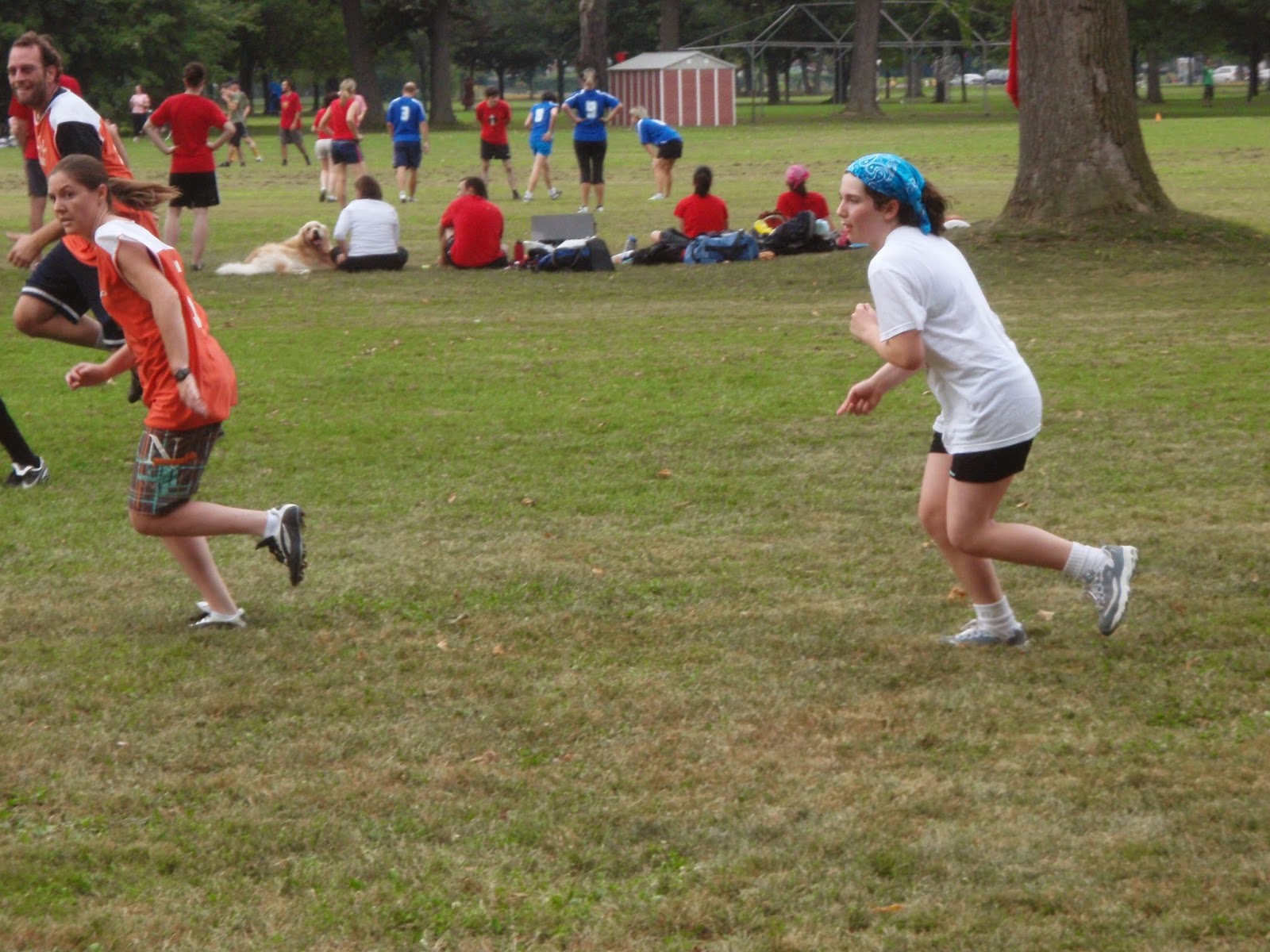 For a year or two, I had great fun watching and sometimes playing with my daughter.  Seeing Jessica play was quite a hoot.  And I am thrilled to report that she now plays with her college team. 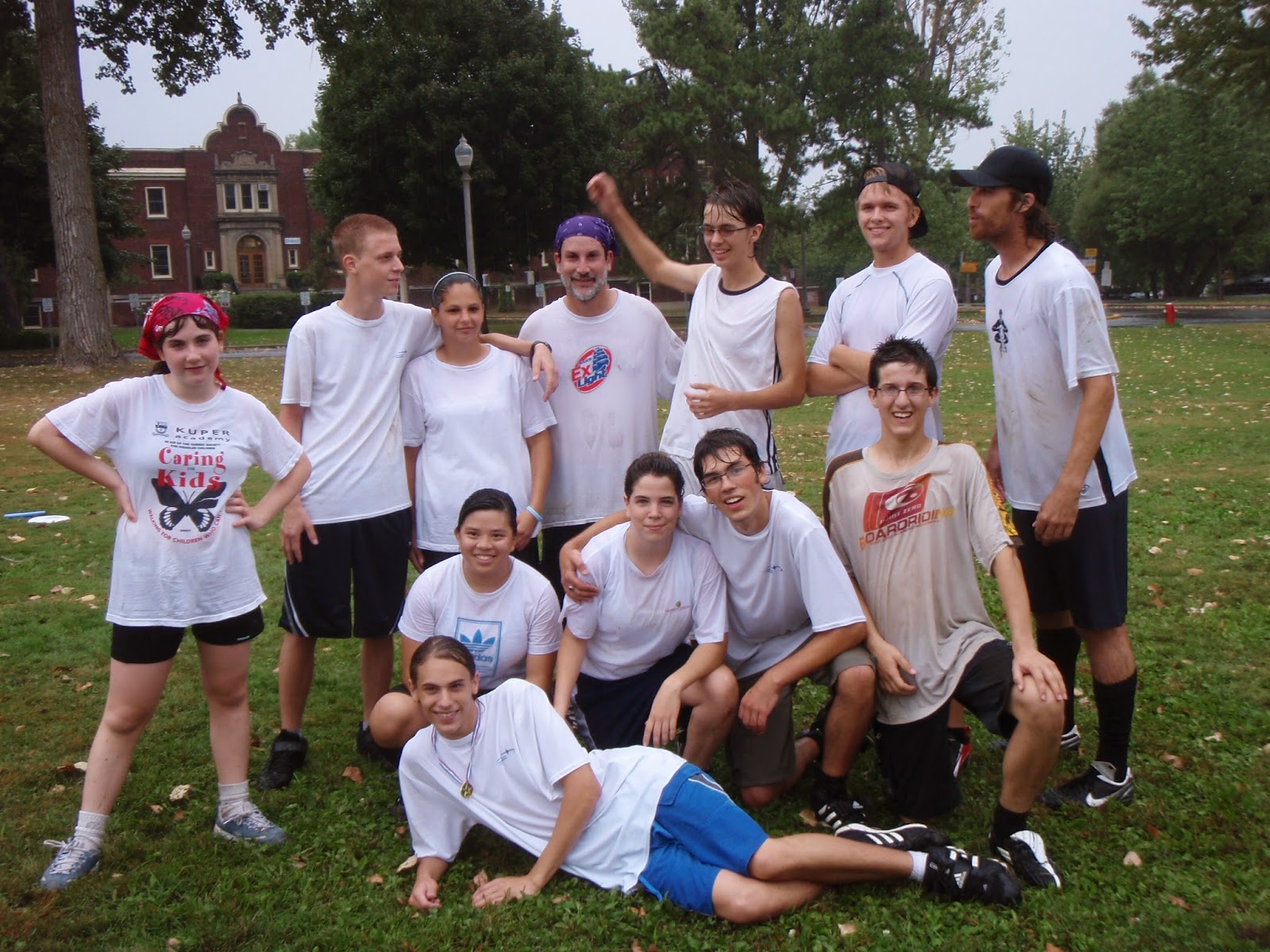 I ended up playing on the Junior team with Jean-Levy, the tall guy on the right in this picture--a fantastic player who has played with the the Canadian national team and on teams that have won at the national tourney.  The kids, he, and I won the C/D bracket during the end of the season tournament.  One of the older teams complained about J-L and I playing, but we were playing with 14-16 year olds against 20-40 year olds.... hee, hee. 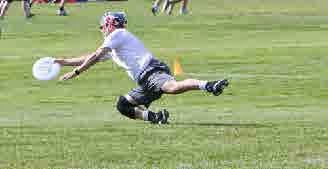 Finally a few pictures of highlights along the way.  I could never jump that well, so I always took pride in my ability to jump down/sideways: laying out for many disks.

And thanks to my daughter and her keen editing skills, we have this video from 2014 proving that I may still have it.

Posted by Steve Saideman at 8:19 PM