The Wound Is Still Open 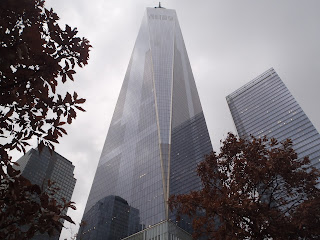 On my way back from the CAF/NATO exercise in Portugal, I had a nine hour layover in Newark.  I hadn't been to southern Manhattan in a long time, so I grabbed a wildly overpriced cab (will not be doing that again) and made it to the World Trade Center Memorial.  The last time I was there, I think, was in the spring of 2002, when it was just a gaping wound in NYC.

Now the site has a new building, a museum, and a memorial or two.  The new building is mighty spiffy.  I didn't go into the museum since the timing didn't work for me.  But I did walk around the sites of what used to be the North and South Towers:

There was a very large crowd on this Saturday fall afternoon.  Very, very diverse crowd.


The memorials have the names of the those who died in the attacks.  Here, people had put a flower and a flag to mark a few names, I guess. 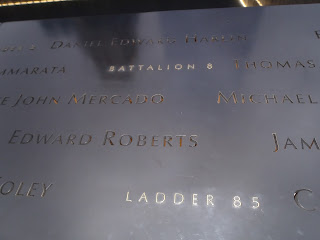 In one spot on the South Tower memorial (maybe elsewhere too, but it was too crowded for me to walk along all of it to see), there were the designations of various units of the NY Fire Department, which took such very heavily losses that day.

I was surprised to learn as I was walking to the train station that Company 10 is literally on the outskirts of the WTC area.  I cannot imagine what it must be like to work in a place that is so filled with memories.


One twitter follower said that she didn't like the memorial because it is unsettling.  And I liked it for exactly that reason--the design basically is of two wounds that have not closed and will not close.  NY has moved on, but will always remember, as should we all.