Today, I started two days of observing/being briefed about the Canadian Joint Exercise/NATO Trident Juncture exercise.  The biggest such event since.... 2001 or 2002 apparently.  Wow.  It involves all NATO members (not sure how the Icelanders/Luxuembourgians can do much sans militaries) and a few partners in and around Portugal, Spain and Italy.  Hence my week in Portugal.

So far, stuff has gone very, very well.  At least that is what the military folks say, and I have to be skeptical because they tend to be relentlessly upbeat about stuff.  However, I do kind of believe them because they did something hard--cross a river--which they had not done in a long time and apparently did not create monster traffic jams.  This sounds trivial, but they created a challenging exercise and seemed to have pulled it off thus far.  Tomorrow is the big climatic battle which means I have to get going at 4:15am (I am so not a military man).

What did I learn today?  Well, a briefer suggested that this exercise was much like the Bridge Too Far story, which was a bad analogy if one wants success....

I learned that the Germans have the only real bridging equipment and it is most funky.  They can build bridges or a ferry quickly and then drive it quickly: 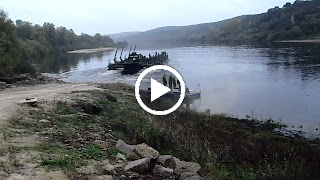 I was reminded once again of NATO's keen ability to confuse via acroynms: PRT?  Well, in Afghanistan, that meant Provincial Reconstruction Team.  Here?  Portugal.  Oy.

People tease the military about their love for powerpoint, but what they love even more?  Organizational charts.  We got hit with multiple organizational charts to show who is involved and in what capacity.  It made sense, but damn, that was a lot of org charts.

After action discussions have to be culturally sensitive: the US, Canada, UK get into very frank conversations about what went wrong so that they can learn.  Other countries, unnamed, apparently have a national crisis or intra-alliance spat if their less than wonderful results are discussed frankly.  Hmmm.

My fave lesson: I asked someone about an element of an exercise that I thought might be problematic, and the respondent said that those in that element were "necessary and were value-added."  Which was delightfully diplomatic.  A sharp way not to say "dysfunctional."

We met with the LOPSCON people--local operations control--the folks essentially running the exercise.  That is, the people who gave the opposing force (the red team) their marching orders, who served as referees (yes, you got hit, now be dead/wounded/captured for a while), and regulate the game so that it is safe.  Far more interesting than I was expecting.

A key effort here was to mix up the units at lower level so that interoperability could really be tested.  For the US this is less necessary since everyone can plug and play into the US.  But across the alliance?  There is much need for this since increased specialization means that countries will need specific enablers (the most over-used term, but the German bridgers are a good example of this) to do key stuff.  And sometimes this comes down to understanding each other even when most folks can speak some English, the jargon can vary.

We shall see how things go tomorrow, but so far, so good.

Posted by Steve Saideman at 5:18 PM