These Few, These Band of Brothers 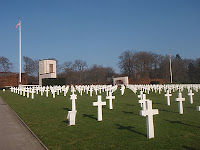 It is perhaps unfair that Easy Company has gotten all of the press since Band of Brothers came out.  It was the entire 101st Airborne Division that was put in Bastogne and nearby to hold the town.  And not just them but other folks as well.  This weekend of US Military Cemetaries in Margraten and Luxembourg make it abundantly clear that there were many, many units beyond the famous Big Red 1, the 82nd, the 101st, and so on.  Numbers of divisions that have been largely omitted from the movies, TV shows, and our minds were stamped on grave marker after grave marker. 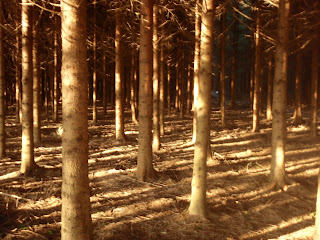 Still, the tv series did an amazing job of depicting what that particular group of men went through, fighting a major battle here.  I walked in the forest here, where Easy had their foxholes.  The forest gets dark and eerie after only a few steps in, as the trees are very close together.  And let's not forget that such trees, when hit by artillery, can produce splinters that wound and kill. 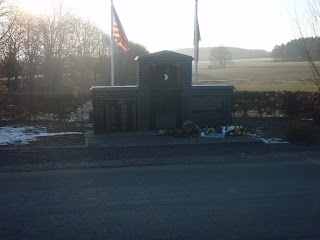 So, perhaps, I should not been surprised to find out on a small country road, my trip greatly facilitated by gps, a tour bus full of American high school or college kids, two cars, and, as I was leaving, a group of men, one woman and one kid marching down the street to see this monument to Easy Company.  This band of brothers, indeed.
Posted by Steve Saideman at 12:29 PM