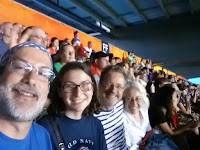 Today was my first time at a real soccer game: Women's World Cup in Ottawa Quarter-Finals with USA vs China.  I wanted to see one game over the course of this series, and gambled that the quarterfinals would provide me with the best chance to see the USA or Canada.  And it worked out.  I went to the game with my niece, a colleague and his wife.  We had a great time as the US won!!  Not a bad way to celebrate marriage equality day.  The highlights are here.

Despite the 1-0 score, the game was  dominated by the American women.  They kept the ball in the Chinese side of the field.  They could not finish, as they kicked and headed many chances over the cross bar.  This was very frustrating, but it seemed inevitable that the US would score.  And they did on a great cross and header.

I am not a soccer expert as I don't even watch much on TV except for the years where the World Cup (Men and Women) and occasionally the Olympics are on.  But the one thing I did notice that was seconded by my more knowledgeable colleague, David Long, is that the American forward was out of position nearly the entire game.  She was almost always offsides which helped to stifle more than a few attacks.

Julie Johnston stuck out, dominating on defense and making many good plays on offense, including the cross that produced the goal.  Indeed, the American defense lived up to its billing.  It will be interesting to see if they can handle the German attack.

Besides some soccer lessons, I also learned that standing up at a game is forbidden, more or less.  I got poked by the woman behind me whenever I stood up.  And I only stood up when the folks in front of me stood up.  Very strange.

My wife, my niece and I spent the afternoon walking around downtown Ottawa as I played tour guide to them.  Twas a fun day, and I did enjoy standing in front of a Supreme Court today even if it was not the right one.  Great day for the USA with greater justice and equal protection for all and then a nice win to put some icing on the cake. 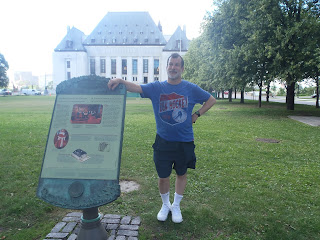