The Starting Points Visited and Re-visited

Mrs. Spew and I were footless and fancy-free yesterday as we were in northern New Jersey for a family event the day before (the last Bar Mitzvah of my sibling's kids), so what did we do?  Ellis Island and Liberty Island.  This seemed like a good way to spend a day, especially after the past few years have taken me to the beginnings of the U.S.A.: Jamestown, Plymouth Rock, Yorktown, Leiden (where the Pilgrims left Europe for Massachusetts).


There was so much that was so striking but what impressed me most about Ellis Island was the composition of the tourists.  It was one of the most diverse collections of humanity I have ever been among (the ELF score was pretty much at its max).   I have been to many tourist sites around the world, and I cannot remember one that had so many people from so many backgrounds.  Which makes sense, partly because NYC brings tourists from all over the world and partly because much of the world went through Ellis Island during its three decades as primary destination for immigrants headed to the US. 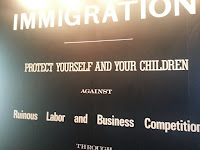 Of course, the history of the US and its immigration is not all peaches and creme.  I was glad to see several displays featuring the backlashes against immigration.  No, I am not a fan of xenophobia even if it played a key role in the Bill and Steve book (being re-printed as a paperback this August thanks to our pal Putin). 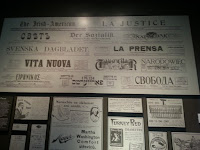 The timing was particularly apt as I recently got into an argument with a Canadian journalist who insisted that the US needed to make Spanish an official language of the US.  Given that English is not an official language, this seemed strange to me.  Indeed, after ten years in Quebec, I am more firmly convinced that the American strategy is the better one: rather than forcing folks to learn English, the US government lets the market and the society induce people to learn English.  The great consistency over the centuries has been this: the first generation may not learn English but the second one will pick up enough and the third will be fluent.  Which is why the picture to the right struck me: the many languages people spoke and wrote when they came over.  Again, American history is chock full of conflict and the union still needs to be perfected, but there are some good reasons why people still want to move to the United States.  I don't think Russia or China have the same pressures caused by people wanting to immigrate.  People do indeed vote with their feet.

Maybe I am being overly patriotic because I found this while walking around Ellis Island: 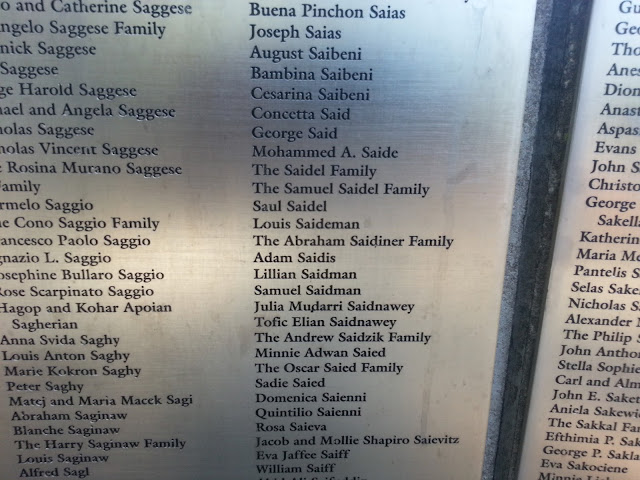 We learned that these panels were not of all immigrants who went through, but those immigrants who entered somewhere and had family members recognize them (pay $, I suppose).  Still, the idea that I was standing near where my ancestor came across more than a century ago gave me some chills.

And, of course, maybe it has to do with how beautiful the Lady was yesterday: 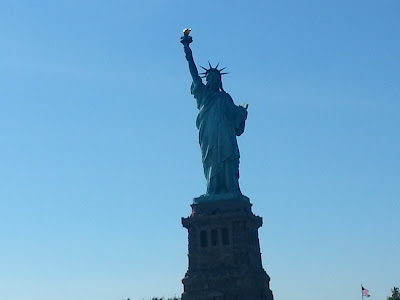 Posted by Steve Saideman at 7:52 AM