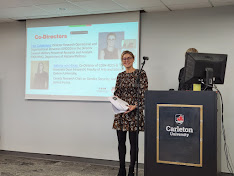 Yesterday, we held the Canadian Defence and Security Network Midterm Conference.  We are 3.5 years into a 7 year SSHRC Partnership Grant.  This means we had to send off to SSHRC a report that gauges how well we met our original goals and how we plan to move forward.  We used this moment and also the Inter-University Seminar in Armed Forces and Society-Canada [IUS-Cnaada] biannual conference to organize a workshop for the leaders of the research teams to present the work they have completed and what they plan to do in the second wave of research.  We also had all three CDSN post-docs present the work they did during their fellowships with us.

I can't express how impressed I am by the work these folks have done and how grateful I am to them for taking the CDSN objectives and running with them.  Below, I am posting the slides from my presentation that reported my take on where things stand. 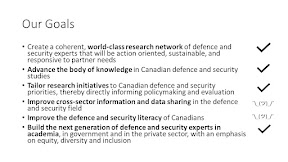 I discussed the original goals set out in the SSHRC grant and suggested that we made clear progress in four and, well, hard to measure progress in the other two.  How do we know we are helping to improve the defence and security literacy of Canadians?    This is something we will be considering in the next few years. 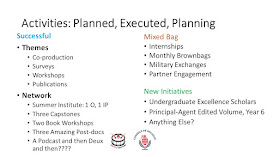 I went through the stuff we have been doing and talked about how the four themes (down from five) have done great work, as the subsequent presentations proved--lots of co-production of knowledge with government and private sector partners, such as the surveys we have done and the personnel theme's work led by Irina Goldenberg of DGMPRA (DND's personnel analysis branch) and Stefanie von Hlatky of Queens).  The pandemic did impact what we did and how we did it, but we managed to implement most of our ideas that we specified in our grant four years ago.  Some stuff has been more challenging--that we have more than 40 partners, for instance, has made it a bit more work to keep most of our partners engaged. 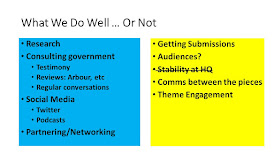 I then addressed what we do well and what we have had problems with.  We have not only produced much research, but we have been consulted by and we have consulted government through a variety of ways.  We are doing policy-relevant work, and a number of actors have realized that.  So, we are not just in an ivory tower yammering to ourselves.  We have been energetic uses of social media, which has helped us get through the pandemic.  We have added a variety of partners that have helped us reach out to more people, get more ideas, and embrace diverse perspectives.

The big challenges have been trying to get folks to apply for our opportunities.  We get only handfuls of applications for our post-doc, for our book workshop, for our undergraduate excellence scholars.  It has also been difficult to get larger audiences for our activities.  Neither of these problems are unique to the CDSN as our friends in other networks have had similar problems.  We need to get more creative and put more resources to get more folks to show up.  I also suggested that we could do better communicating with each other.  The Midterm Conference was partly aimed at addressing this. 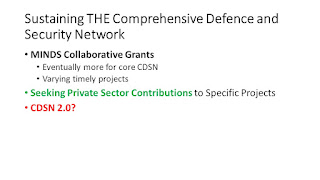 I concluded by discussing the big question of sustaining beyond the SSHRC grant.  We have a variety of paths ahead of us, and we plan to take all of them.

Overall, I am most proud and pleased about what the CDSN has done and what it has become.  As I told everyone, my role is mostly taking credit for everyone else's hard work.  I am very grateful for the teams we have built--the staff at Carleton, the co-directors leading the research efforts, the advisory board, the emerging scholars, scientists, and policy makers that have contributed so much to our events, and the partners in academia, government, the military, and the private sector.    And yes, I enjoy the associated dinners when we meet! 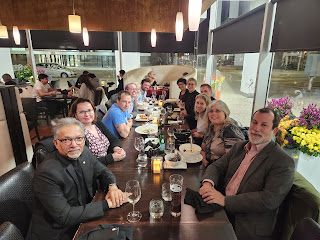 Posted by Steve Saideman at 9:45 AM No comments:

Email ThisBlogThis!Share to TwitterShare to FacebookShare to Pinterest
Labels: CDSN

On this Thanskgiving in Canada, I feel both great and like crap.  Like crap because we got our 4th shot yesterday, and I am having some side effects.  Great because I got our fourth shot. It was always going to be a relaxed holiday since it is in between LA-fest and NYC-fly by. 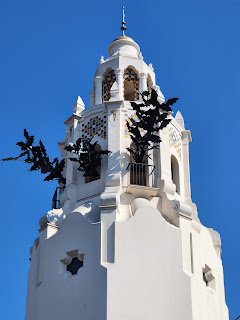 thriving.  The pandemic had preventing us from going there, but she had made it to family events on the east coast.  We got to meet 1/3 of her roommates, her cat kind of (shy cat), and we took her to Disneyland.  It was, indeed, the happiest place on earth if happy means packed!  It was set up for Halloween, which was fun but not as much fun as Busch Gardens about ten years ago with chain saw clowns and crazy doctors popping out.  Instead, we explored the new stuff--the Avengers complex with heaps of Spidey stuff and the new Star Wars land, which was most impressive.  We tried the blue and green milk which tasted more like sweet tarts than like milk.  We missed the big new ride--Rise of the Resistance--as it broke just as it was our turn.  Yuck.  Still, it was a great silly day. 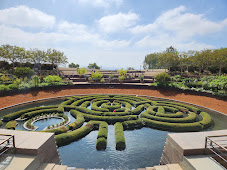 We did heaps of art and gardens as well.  My wife and I went to the Getty on Friday while my daughter was working, and then we all went to the Huntington Gardens.  It involved a fair amount of driving, but we didn't deal with too many jams.  I do love driving up and down the canyons.  We ate very well, with me testing three different French Toasts.  None matched Hoshinos of Japan, but Porthos was the LA winner.

What else am I thankful for?  The help of friends in all that I do.  The CDSN stuff, the 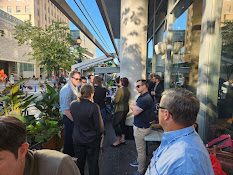 sabbatical supplements (I am looking for salary replacement for next year's sabbatical), emotional support during these stressful times, laughs, advice, and more.  This pandemic has been hard for all of us, but as an extrovert, being denied the opportunity to interact has been tough on me.  I was so happy to go the APSA last month in Montreal, to see my poli sci friends from all the way back including grad school pals, a friend from my first job, more recent folks.

I am not thankful that the provincial folks getting elected across Canada suck so mightily.  Doug Ford got re-elected for .... being lucky enough to have crappy opposition.  He bungled the pandemic and is now continuing to drive folks out of the medical fields.  In next door Quebec, they re-elected a xenophobe with even more seats and votes.  A rapid nationalist is taking power in Alberta so that will mess things up further.  Good thing American politics is turning around.  Oh wait...

I am thankful for Nigella Lawson, Sally's Baking Addiction, King Arthur Baking Company, Smitten Kitchen, and more as I am definitely eating tastier stuff with few (although some) fails.  I am also thankful for bice cream season which is now over.  I might have a few more bike rides left, but I am a fair weather biker, and we are nearly out of fair weather.  I do look forward to ski season, and I am already scheming with JC for more snow time.

I hope you and yours had a great Thanksgiving. The joy of being a dual citizen is that I get to do this twice!

Posted by Steve Saideman at 7:47 PM No comments: