Under the Category of About Time

Pentagon Faces Growing Pressures to Trim Budget.  Ya think?  Given that the only real way to cut the US budget is to cut defense, medical spending (medicare/medicaid), social security and raise taxes, it is only time that this gets considered, especially since it is the easiest to cut of these categories.  Of course, that is not saying much--does this make defense the sixth rail of American politics (social security as the third rail, medicare and taxes as the fourth and fifth)?  Or is that just abusing a metaphor?  Oh, it is.  Never mind.

Getting out of Iraq will certainly help. Getting deeper in to Afghanistan, not so much.

To be clear, the dollars are a lot, but the % on GDP is not as much as you would think: 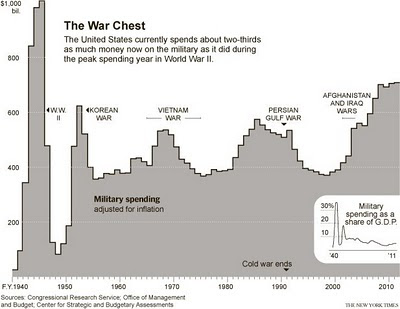 Still, it is a heap of money.  And the problem is that many programs do pay well to various Congressional districts and states so cutting big programs will be politically difficult.  Not just bases, either.  A lot of bases have been closed.  Instead, some serious thought about what the US will need in the present and future will be required--what wars will be fought, what kind of stuff will facilitate conventional and nuclear deterrence, etc.  Just as the Canadians cannot seem to figure out what they need (F-35s?), the Americans are likely to be bad at finessing these decisions as well.

Gates has promised: “Military spending on things large and small can and should expect closer, harsher scrutiny,” Mr. Gates said. “The gusher has been turned off, and will stay off for a good period of time.” And it will be harder for Congress to ask for tens of billions of dollars to be spent on stuff (like alternative engines) that the military does not necessarily want.

Unfortunately, just as with the entire budget, the military side of things is also heavily weighted towards people costs:


Two-thirds of Pentagon spending is on personnel costs. It is possible that the Pentagon will have to look for the first time at cuts to the health benefits provided to active and retired military personnel and their families.Some analysts said the Pentagon would eventually come under pressure to reduce the size of the armed forces.

This is not good news.  The services, especially the Army, are already stressed doing alot with too few people.  But if and when the US gets out of Afghanistan and Iraq, one could imagine some downsizing, but not too much if the US continues to aspire to being a superpower with interests around the globe.  The weighting of commitments and capabilities is basic to grand strategy but so very difficult politically.

Tough choices ahead.  Finessing them will be difficult to get right even before we take into account both the pork barrel politics involved and the Party of No (that would be the Republicans).
Posted by Steve Saideman at 9:46 AM