Is putting himself into a comic book, not unlike his many appearances in Marvel movies.  I love the premise--that Stan Lee, creator of comic books, runs into seven aliens who are stuck on Earth.  He decides to give them superhero identities and roles.

But one complaint--he is wrong about this:


Mr. Lee said he endowed other characters with powers never seen before; for example, “Think chubbiness as a weapon.”

And I would think of the Blob: 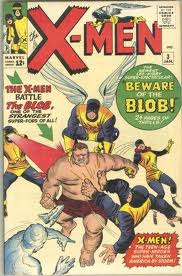 But the article does conclude with a more accurate and insightful quote: