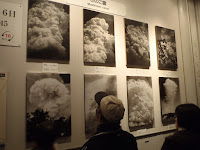 Not sure August 6th, 1945 is the saddest day in history, but it is definitely in the competition.  I went to the Hiroshima Museum this afternoon as part of the tour of Japan.  I think the last time I was this moved and this sad was when I visited Dachau in 1987.  The displays were just incredibly sad, featuring many burned/torn/tattered kids' clothes, among other objects.

After a week of hearing how China and South Korea are still bitter at Japan over World War II, I could not help but think a bit about how the US and Japan have a very good relationship.  This despite the fact that the US laid waste to the entire country with the attacks on Hiroshima and Nagasaki, along with the fire bombing of Tokyo.  The museum's main message is not one of hate but of pacifism--that nuclear weapons should be dismantled.  I didn't feel hate radiating from the Japanese around me as we walked through the exhibits even though I am clearly American.  I know that the Japanese have not always handled its history in WWII as well as Germany has, but if the Japanese can move beyond what the US did to it (in response to their attack on the US), maybe South Korea could move on now?

One of my colleagues noted that the museum did not have much context attached to the displays.  The only discussion of World War II was a bit strange: a reference to the Incident that led to the war with China (making it seem like an accident and not like aggression) contrasting with a clear reference to Japan attacking the US and the rest of the neighborhood.  Other than that, it was just about the effects, which were devastating and enduring.

So, here are some of the pictures I took.  I am glad that they brought us here.  People tend to toss around nuclear war and bombing back to the stone age far too carelessly.  I will try to avoid doing so in the future.

Posted by Steve Saideman at 7:21 AM