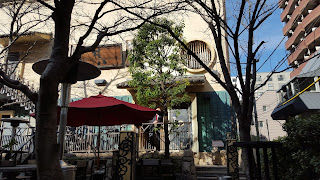 The firehose keeps on on keeping on as we are being given a heap of info to assess.  I am starting to think the Japanese style of providing handouts of powerpoint is an interesting way to go, despite the dead trees.  Anyhow, today's stuff bounced around quite a bit, with the key consistent theme of "really good food."  Indeed, lunch was at the same place that President George HW Bush threw up long ago (see pic -->)
The only downside to lunch was that it was in an interesting area and we had a chance to walk around, but we got driven to a slightly different area to explore--heaps of upscale shops that were far less interesting.

Our first meeting was with two professors from the National Graduate Institute For Policy Studies. The conversation was wide ranging, but some of the key insights they shared with us include:
We then met with a representative from the Economic Partnership Division about the various Japanese efforts to negotiate trade agreements.  None of the folks on this trip are IPE people so we had very few nuanced questions to ask but still learned a great deal.  Key insights:
The next meeting was held in the Prime Minister's Office Buiding, which is almost certainly the most beautiful government building in which I have ever stepped.
The conversation with the highly ranked official was mostly off the record.  It was wide ranging and very frank and interesting.  I was most struck by the explanation of what Canada's role in all of this.  Japan does not consider Canada's military power to be relevant and is not asking for heaps of ships to move to the Pacific.  Nope, the focus is on convincing Canada that it is a Pacific power, that as a G-7 democracy, it has a leadership role in helping mentor the younger democracies of Asia/Pacific.  That the key to the long term in the region is building stable democracies that can resist Chinese efforts to corrupt them (literally).
My reactions to this:
A couple of other insights from this conversation:
The last meeting became two meetings as we met an American Air Force officer who is essentially interning here via a fellowship.  He was so very sharp, reminding me of how so many officers I met can quickly drink from the firehose and be conversant on the key issues.  Just super impressive.
We then met a representative from the China/Mongolia division of Foreign Affairs.
Our last day of briefings is mostly at the Ministry of Defense.  Woot!  Then we get two days of organized tourism--Hiroshima and Kyoto--before returning home.  I am a very lucky guy.

Posted by Steve Saideman at 4:34 PM