This was the last day of briefings (see here for day one, day two, and day three).

We started at the Research Institute for Policy Studies where the China focus (North Korea got way under-played during our time here) was prevalent again.  The discussion focused on China's efforts to develop a global strategy to overtake the US.  Again, we got the message that Japan is looking more for political support from Canada and not military stuff.  This led to a conversation with my fellow travelers--does Canada care about Japan?  Will the new government sell out Japan for access to the Sopranos-esque markets of China?

We then went over the Ministry of Defense.  It is not near all of the other government buildings but a bit distant.  Symbolism much?  A big, funky building (interior courtyard looks a bit like key last scene from Spectre) that seems underoccupied.  No Pentagon-esque flow of heaps of people, which distinguishes this building from pretty much the rest of Tokyo.  Anyhow, we talked with someone fairly high up--he had a great view!  What did we learn?
We then met with someone who works on the procurement side.  Most interesting meeting room ever: 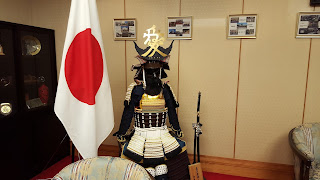 The last meeting was at the National Institute of Defense Studies, which seems to be me to be akin to the National Defence University in DC--combo of think tank and educational program for senior officers.  Very impressive outfit. We were briefed both about the institution and their annual East Asia Strategic Review.
And that was it.  We were left on our own for dinner so I tried out the subway system, which is both simple and complex.   Complex because it has so many different lines that seem to overlap (thank you, google maps!).  Simple because the machines can work in English, and there is plenty of bilingual signage.  More good food and finally some shopping for silly stuff.  Onto Hiroshima today and Kyoto tomorrow so the next posts will be almost all tourism and no briefing reports.

When I get back, I will write something up that summarizes what I learned and what Canada (and US) should do.

Posted by Steve Saideman at 4:41 PM