Quarantine, Week 34: All Over But the Screaming and Shouting

I still haven't posted an assessment of my pre-election predictions because we still do not know ... oh wait.  We do know.  Just don't know the details yet, but Biden will be the next President.  The networks are afraid to say so because of 2000 and 2016 and because there is a tantrum monster in the White House.  But they have declared winners with less evidence before.  Biden broke through in places Dems hadn't won in 20+ years--Georgia and Arizona--and won more votes than any other candidate in history.  Not as much condemnation of Trumpism as the GOP voters turned out in far bigger numbers than I expected, and that gives us some pause.  Fear of the loss of white power, the control of the media by Fox/Sinclair, and maybe a few other factors are driving this, and none will disappear anytime soon.  So, it is a good but not great week. 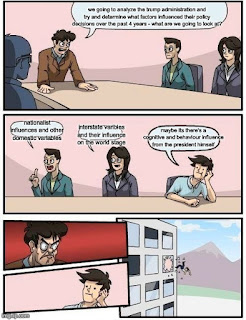 One way I have been getting through this has been enjoying the Meme of the Week contest in my undergraduate class.  So much so that I have decided to add this to my grad class next term.  The big teaching challenge of the week is that Carleton extended winter break to give its employees a few more days off (with no negative consequences for leaves/pay/etc).  Which means that classes that meet on Thursdays and Fridays lose a day.  So, I lost a week for my seminar and don't know which week to drop.  Not a huge problem, but something to figure out.

The CDSN had a great week as Irina Goldenberg and Stéfanie von Hlatky ran a great Personnel Theme workshop for two days where they had military and civilian academics, defence scientists, government officials, military officers, and others come together and discuss the progress and challenges facing efforts to build a diverse and inclusive Canadian Armed Forces.  It was exactly the kind of thing that I was hoping for when we started building the CDSN.

This week was also the culmination of pandemic baking.  I kept needing baked goods that I didn't have in the house--pita bread for my favorite greek recipe, wheat bread for sandwiches.  Rather than shop, I just made the stuff.  Not something that I did often pre-COVID.

There was other good news.  My daughter is unfurloughed.  It might make it harder to get my stuff edited for classes next term, but she will be fully and maybe more than fully employed.  She will still find time for activism, but maybe the pace of that goes down a bit after the election.  I stress shopped for a new laptop, so that was fun.  My current laptop is not very old, but I lost the chance to get its various problems repaired since I was going to take it in and drop it off just before the ISA in Hawaii in mid-March.  So, yeah, a new machine in the mail. Other stress-shopping has produced new winter sporting gear--snow shoes and cross country skis.  Hopefully, the $ spent will commit me to actually doing that stuff when it gets cold enough and snowy enough.  A long winter of sticking inside on a treadmill needs some changes of pace.  And, yes, climate change means that I get to bike this weekend and maybe for a bit longer.  But I still live in Canada, so winter is coming indeed.

Trump's time is ending, even if Trumpism is not going away.  There is much executive power for Biden to exercise, and just the removal of the arsonists from the cabinet will make a huge difference.  I don't know if Biden will have the fortitude to push back and do what is necessary or whether he will vainly try to get Mitch to cooperate.  I hope Joe learns quickly that the GOP is determined to see him fail, so that he must circumvent them as much as he can.  And, yes, my nieces are contemplating moving to Georgia to vote in the runoffs in January.  The Senate is not yet lost.  I am still hoping for an NC miracle.  It is hard to be positive as COVID is escalating in the US and around the world, but we are now much closer to the end of it this weekend than we were last weekend.  Elections do indeed have consequences, and I am going to be getting heaps and heaps of joy out of the misery of the Trumpers.

So, keep on keeping on.

Posted by Steve Saideman at 9:04 AM