Quarantine, Week 35: The Five Stages and So On

It has been a busy week for everyone, I think.  I spent much of it pushing back, along with the rest of #civmil folks, against the idea that there will be a coup in the US.  Erica deBruin wrote a great piece that represents the consensus of the civ-mil folks I know.  I even created a new fetch meme: 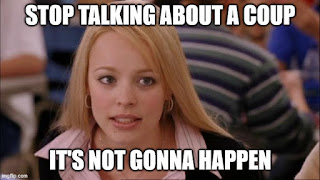 Melania has referred to this being their last Christmas in the White House, the Trump lawyers are quitting, and Giuliani is being given the role of leading the legal processes, which is itself an admission of defeat.  So, we are moving beyond denial.  The next stage for the GOP and for Trump will be anger--its perpetual state--which will focus on blamecasting.  Who lost the election for Trump?  Certainly, he won't think it is his fault.

The five stages of grief are in my head this week, as the IR community lost a great guy.  Sean Kay, a professor at Ohio Wesleyan, died yesterday.  I believe it was sudden since everyone seems surprised.  I knew Sean via twitter and blogging mostly, which led to multiple shared beers and meals at conferences.  I really did not know him that well, as the various remembrances are informing me of how much of a life he lived and how many multitudes he contained.  The threads by his students and the facebook comments demonstrate that he was so very caring, so very dynamic, and so very loved.  Gone way too soon.  So, yeah, I am in the anger phase, I think.

I am also a bit depressed--that the entire US is red and so is much of Canada is in terms of COVID spread.  Both countries have botched the response but in different ways.  In Canada, there seem to be sharper limits on what the federal government can do, so we have had to rely on provincial leadership, which has sucked bigtime with a few exceptions.  In the US, the country has to wait two months for decent leadership.  Trump is not going to do what is necessary, so cases are going to continue to spiral.  Governors gave into restaurants and bars and churches and didn't enforce mask mandates as much as they should have.  So, there will be no Thanksgiving and no Christmas except for those who don't mind killing grandma, and, alas, there are too many people who are willing to risk their families' lives.  The news of a reliable vaccine gives me much hope that the fall of 2021 can approach normal, but the bodies are going to pile up (see the pics of freezer trucks in El Paso) before we get there.

There are signs of hope.  My daughter is back to work as Hollywood is picking up the pace.  My undergrads are seeking advice about our grad program.  The Biden team is building lists of incredibly decent and smart people, and diverse lists at that, for the transition.  I recognize some of the names on the DoD and State lists, and that gives me much hope that the new administration will only be competent but more than that--staffed with experienced people who bring with them not only expertise but good judgment and, yes, good hearts.

My guess is that we are probably around the middle of this thing or even a bit past it.  It is going to get worse this winter before it gets better, and it will have a hell of a tail as COVID survivors are going to dealing with the effects of this for a long time.  So, the only way out remains through.  Be distant, be masked, and be well!

Posted by Steve Saideman at 9:52 AM