I had the chance to go to Berlin when I was doing my Eurailpass tour of Europe in 1987, but it was kind of out of the way and cost more money.  So, I didn't, thinking I could go see the wall some other time.  And then the world changed.  The question is: how much?

People have been reacting online in a couple of ways:
My basic take is that we tend to observe what we want.  What did we expect on that amazing night thirty years ago?  Would we have expected Russia to be led by trolls seeking to mess with pretty much everything?  Not sure.  Would we have expected most of Eastern Europe to become and remain democratic thirty years later?  Hungary, Serbia, Belarus, and Poland are the exceptions, a growing group that should cause much dismay.  However, there was both more and less ethnic conflict than one might have expected.  When empires fall, ethnic conflict ensues.  Thanks to some interventions and some other dynamics, Yugoslavia largely remained the exception and not the rule.

I have been to Berlin several times to do and to present research.  I tend to go to the same places--Checkpoint Charlie and the East Side Gallery 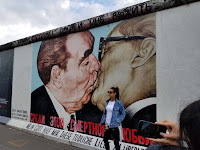 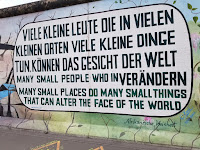 I do think much has changed and much of it for the better.  Europe is not perfect, but it is far better off being unified than divided.  There may be some holes in the map of European democracy, but most Europeans are living free.  There might be lots of dissatisfaction, but, thus far, opposition to most governments has been peaceful and exercised through the ballot boxes.  We can be disappointed about the backsliding, but we should remember how much progress has been made.

To say that China's rise is hugely important should not diminish the meaning and relevance of the fall of Communism in Europe, the mostly enthusiastic embrace of democracy, and all that the Europeans have accomplished since 1989.  The irony, of course, is the defeat of the far left in the late 1980s has been replaced by the emergence of the far right abetted by Russia.  Brexit would not have happened had not the Conservatives tried to placate their right flank.  Trump, well, he has more than abetted the far right in the US and around the world.  So, we can be plenty depressed on this day as well.

I will choose to focus on the upside, that so much changed 30 years ago, most of it for the better.  If we screw up what we inherited, that is on us.