Quarantine Report, Week 69: The End of the Quarantine for Some of Us

My elder sister asked this week what will happen to the quarantine report now that I am double vaxxed plus two weeks.  The answer is that I will try to keep writing at least weekly, but that it will no longer be a regular status report on being cooped up.  Mrs. Spew and I reached two doses plus two weeks a couple of days ago and marked it by eating out for the first time since last summer.  Last summer, we did take out in various small towns in the Ottawa region, but we did not patio.  So, this week was our first patio/eating at a restaurant since March of 2020.  Even though it rained, we went out to a restaurant we like quite a bit.  A very nice change of pace. 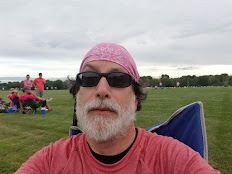 The second major normalization was the start of the summer ultimate season, about six weeks later than usual.  My Monday team is the same I have been playing with since I moved here.  My Wednesday team is almost completely new to me with one teammate someone I have played against regularly in the Grandmaster League (40 and over).  Tomorrow, I play in a Sunday Master/Grandmaster pickup game--we didn't get enough players for several teams, so we will just be switching things up from week to week.   So far, I am not too sore, my throws have mostly been on, I have actually made a decent defensive play or two, laid out for a few disks, and even outsky-ed a, um, shorter person (watching instagram stories of the professional ultimate league may have inspired me to jump up more rather than the usually jumping sideways/down).  So, it has been a heap of fun, great to finally be in groups larger than two as well.

The third bit of returning semi-normalcy is that I finally got a haircut.  I developed much sympathy for women with long hair as my glasses and mask combo got harder and harder to keep on my face with more and more hair on the sides of my head.  The final straw was that it was getting harder to tie my bandana with all of the hair in the back.

I have written before about the lessons of the lockdown, but as the quarantine winds down for me (at least for now, and, yes, just for us lucky North American folks), I am wondering what else to take away from all of this.  Again, I found the desperate need to connect.  I also found it hard not to have changes of pace--just the same stuff day and day out for 18 months or so.  I know I got on Mrs. Spew's nerves--she is used to getting breaks from me as I gallivant around the world.  But I also found that we can persist and endure and even thrive a bit.  Hollywood Exec Assistant Spew has been looking for a new position on the creative side of Hollywood, and she has persevered, making it past the first round at a number of places.  The CDSN has managed to keep going, with the transition to online opening up a variety of possibilities for the future, even as we move back to in-person events.

It has been a very stressful year although not as stressful as the first year or two of baby Spew's life.  I didn't sleep great this year, but I got far more sleep this year than I did 25 years ago.  My job was pretty stable although moving online for classes created more work.  Staying at home day after day got monotonous but not very stressful.  I lost some friends and that hurt--definitely the worst year of my life for losing people.  Plus we lost our cat who spent the last part his life being far more cuddly than the previous 17 years.  So, it was definitely the saddest year of my life, but, again, being a new parent was far more stressful.

Anyhow, when I started doing these Q reports, I did suggest that the pandemic and quarantine could cause me to lose it.

Well, did I descend into madness?  You be the judge:

It has been nine months since I had my last hair cut, and my hair would look like the Joker's after showering.  Turns out putting green goop in my hair reduced its width.  Oh well. I decided to have fun with it before I chopped it off.

Be well and indulge your silly side--it is a key strategy for staying sane through all of this.  Of course, as these videos suggest, it may not have worked in my case.