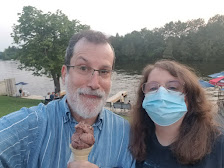 Ten years ago today, I arrived in Ottawa, a place I had never expected to live and work.  I had been working to move on from my previous job and got several interviews in the DC area.  Instead, I was told about a job interview process at Carleton that I knew I would not get (long story), but I had hoped to practice my stuff and maybe make a few connections.  Instead, I got offered a different job--the Paterson Chair in International Affairs.  And I will forever be grateful for the accidents and luck that got me here.  So much so that I resurrected one of my oldest Spew gags: how I am surprised, troubled, enchanted, and humbled.

While there are somethings I miss about my previous job and about Montreal, I know that I made the right decision ten years ago for me and for my family.  That we will not be leaving Ottawa when I retire, as we like this place and we really like the people we have met along the way.  This place very much feels like home, and I have much gratitude to all those who made us welcome.  My ultimate career is nearing its end, so I will have to find some other activity to keep me busy in the summer.  I may really become Canadian if I end up paddling up and down the canal.

Anyhow, thanks to everyone for making us welcome.