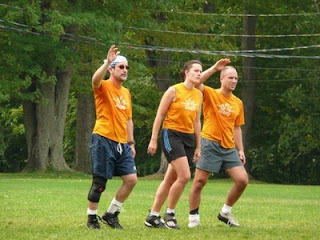 
One of the happiest developments in my life over the past year or so is that my daughter is now sharing my love for this silly but amazing game. She is learning my creed: more ultimate is more ultimate!
Posted by Steve Saideman at 1:41 PM

cool -- I didn't realize that about the game. And honetsly, I'm surprised you didn't have a blog earlier, you have so much to say (and I mean that as a compliment) =-)