President Hamid Karzai announced which parts of Afghanistan will transition from ISAF control to Afghan control: four cities and three provinces.  The cities include Mehtar Lam, Herat, Mazer-e-Sharif, and Lashkar Gah.  The provinces include Bamyan, Panjshir, and most of Kabul.

First, there are some surprises and non-surprises in this list: 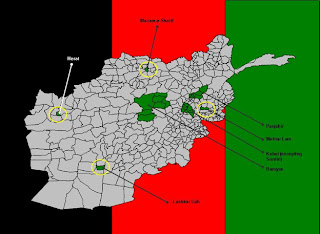 The Canadians would like to see Kandahar on the list, but that is quite, well, laughable.  Yes, the Canadians have worked hard over the years, but Kandahar is hardly ready to be among the first to be turned over.  Especially since the politics here are shaky with Karzai's brother, Ahmed Wali Karzai, always stirring the pot.

It is not clear what transition really means since the first case of it--Kabul--still has not really happened.  The idea is that Afghans take the leading role in providing security.  That means PRTs can stick around, I guess, since they are not security providers but development and governance facilitators (or whatever).  But their efforts/movements are heavily coordinated with the military units, so will Swedes remain in M-E-S and be guarded by Afghans? Or will the Swedes move their PRT to someplace else?  Lots and lots of unanswered questions.
Posted by Steve Saideman at 7:10 AM