Brian MacFadden brings the heat in a big way this week, taking on the Men's Rights and Open Carry entitlement folks: 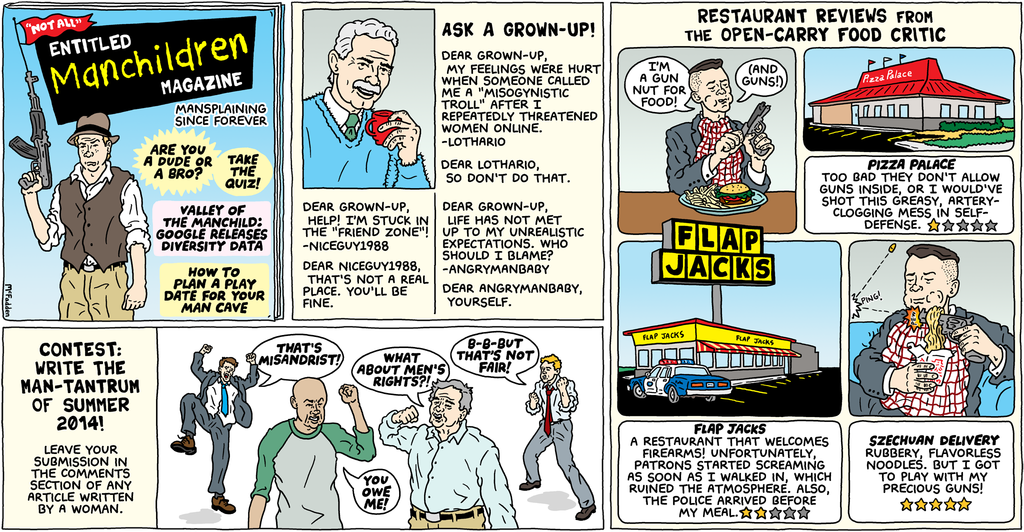 I hadn't thought of putting the two together, but it works so very, very well.  I must admit that when I heard about the frustration that the SB killer had with pickup artists, I was shocked.  My first thought was that only 14 year olds believe in pickup artists and their magic ways to score with the ladies.  Apparently not.  I guess somebody does indeed buy the books and the other merch of the avowed artists.  I could understand the resentment against these hucksters except the onus is on the fools who believe them.  I mean, if you send money off to Nigerian princes, shame on you.

The Open Carry folks have a similar sense of entitlement via a bad reading of the 2nd Amendment.  I do wonder how male that movement is.  My guess: very.  I would have some sympathy for the argument that folks need guns for self-protection if it were not for the years and years of statistics showing that owning a gun is far more likely to lead to someone in the house getting killed by it than it being used for protection.

The combination of ignorance and entitlement in both of these groups is breathtaking.  Anyhow, the next time anyone complains about how entitled the Millennials are, I will point them to two real groups of people that are super-entitled rather than the imaginary characteristics of folks who were all born in the same big time frame.

Email ThisBlogThis!Share to TwitterShare to FacebookShare to Pinterest
Labels: gender, guns, US politics