The academic publishing process is so long and often very frustrating, so when a new publication comes out, one cannot help but be relieved and use it as an excuse to do stuff like order out for Chinese food.  Oh, is that just me? 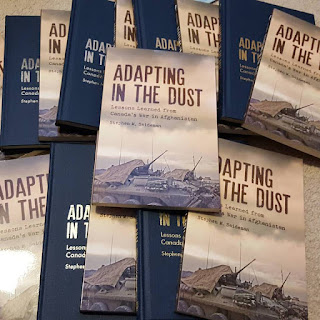 Tomorrow, Adapting in the Dust: Lessons Learned from Canada's War in Afghanistan will be officially released.  It can be ordered via the usual places (U of Toronto Press, Amazon, Barnes and Noble, etc).

The book is different from anything else I have written:
The book tour commences next month with stops in Quebec City, Sherbrooke, Ottawa, and Vancouver.  I am sure to be talking about this book elsewhere, not to mention whatever media outlets that will have me.  I am sure folks will get tired of hearing me talk about it, but I enjoyed the research and writing so much that I cannot contain my happiness that this book is now out there for others to read.

Because of all the help I had along the way, today's song from the Adapting soundtrack is: