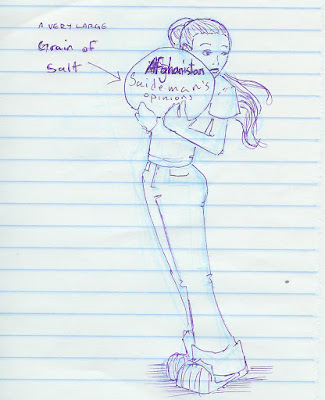 Yesterday, at the CGAI Symposium, I got to eat some crow as I was reminded that I had tweeted  about something and turned out to be wrong.  In this case, it was the Mistral story.  I had poo-poo-ed stories that indicated that the Canadians were interested in the French amphibious ships that were no longer being sold to the Russians.  As it turns out, the government was interested, the Canadian Navy wanted them, and the procurement bureaucrats were too slow and not so interested.

That news plus my speech last week after getting the Public Commentary award reminded me that this whole public engagement thing can be a bit, um, embarassing.  That I will say stuff that turns out to be wrong.  So, I decided to list a few of my more recent mistakes, so folks can read what I say here and on twitter with a huge grain of salt (as depicted long ago by one of my undergrads).
What else have I gotten wrong lately?  Really, I want to know.


Of course, if one does not say anything, one can never be wrong.  But silence has never been a strength of mine.  More importantly, if one is going to talk about international politics and not just describe but analyze and even predict, then one is going to be wrong.  The obligation to engage the public and its rewards mean that I will keep risking being wrong.  I just hope that the advanced analytics folks will consider my VARF* to be positive.

Posted by Steve Saideman at 5:53 PM