I should have heeded the advice of Pop from Luke Cage: 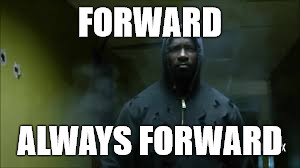 But I did not, as the US Embassy was hosting an interesting event.  The State Department had put together a team of ten or so Canadians, including a couple of members of parliament, to observe the campaign and the election in its last ten or so days in DC, Louisiana and Ohio.  The Embassy had two of the MPs talk about what they observed.  I thought it would be interesting to hear what they had to say, and it was.  It was all Chatham House rules, so no attribution.

Anyhow, I am now agitated and annoyed because, well, the outcome sucked and the campaign sucked.  There was some complaints about HRC not having a message except that Trump was unqualified (which he proves every damn day).  A good point was that her big speech on the last night started with a reference to the Khan family and not to what she stood for.  BUT dammit, she did have lots of content and policy and messaging that got crowded out by Trump's daily demonstration of being unqualified.

Also, the two speakers did not mention Comey, wikileaks, or the Russians.  They did mention that many folks they met thought Hillary was corrupt, which ignores the kleptocracy that Trump was predicted to be and is.  People didn't care about Trump's corruption, and the media underplayed.  An interesting point was that the media folks in DC thought that they could give Trump heaps of not so negative attention because he wasn't going to win.  Yep, they got cocky too.

One of the speakers downplayed race, and I nearly lost it.  I am sure those around me were probably not thrilled with my mumbled curses. Yes, HRC's deplorable mark cost her some votes and energized Trump's base, but Trump started with racism and built an audience based on that racism.  No, we have no clear strategies for responding to it, but not calling it out seems to be problematic.

No one articulated the basic challenge in this campaign--a heterogeneous party competing with a homogeneous party.  They did mention the misogyny as they repeatedly heard "I will not vote for that woman", but did not discuss it at length.

Overall, a key challenge, as always, is how to relate the master narrative to the micronarratives.  We have that problem in civil war research, and we have that problem in this election.  Because it was so close in a few states, we can blame lots of stuff or focus on a single thing.  Looking backwards?  I blame Comey most of all, HRC and her campaign for not doing more in Wisconsin and Michigan some, the media a fair bit for so much false equivalence, evangelicals for selling out much of their faith for the Supreme Court seat, and the complacent Democrats who had no reason to be complacent after the Comey letters.

I didn't get a chance to ask my question: which do you fear most: Trump causing World War III or a new Great Depression via trade wars and debt defaults?  Yeah, I am in a super cheery mood this holiday season. 🙅😵😩😡💩💀👿🚽
Posted by Steve Saideman at 8:24 PM