A few years ago, I got contacted out of the blue by the people who produce Brad Pitt movies.  They were working on a movie about the US effort in Afghanistan, had found an article David Auerswald and I had written. They were looking for interesting material to supplement the stuff they were using from Michael Hasting's work on General McChrystal, and so I ended up having a phone conversation with a producer while he was driving around Los Angeles. 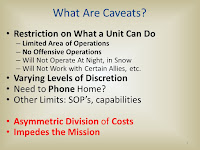 So, I had been eager to see War Machine, the Netflix movie that just dropped this weekend.  Lo and behold, within five minutes, there's a junior officer talking about alliance politics, using a line I had said in many talked (see the slide) about countries not being willing to fight at night or in the snow. 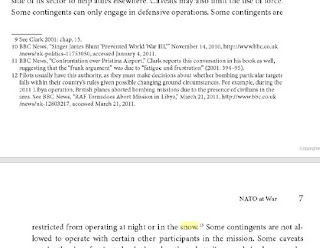 The way the officer sound it sounded exactly the way I talked about it in numerous presentations.  So, I think I conveyed it that way while on the phone.  They could have gotten the line from the book (see to the right), but not the article that they originally mentioned.

Anyhow, I was mighty pleased to see our work appear in a movie.  Not sure it counts as either a citation or policy relevance, but I will take it.

Regarding the movie itself, it tries to have it both ways: tell the McChrystal story and be a fictional take.  So, there is some confusion about what really happened.  For instance, in the movie, Obama blows off McMahon (Brad Pitt as McChyrstal) in Copenhagen.  From what I remember, they did meet and chat there.  For my interests, I was more annoyed by a line later in the movie as McMahon was trying to get more contributions from Europeans (force generation is begging!)--that the Germans would contribute but that their contribution would be restricted to base.  Alas, as Dave and I found and wrote about, this ain't true--the Germans actually made their troops more flexible--able to engage in offensive operations--in 2009 (around the time McChyrstal was doing this stuff) because their parliamentarians had realized that the restrictions had made the German troops targets.

So, I am pleased to see our stuff in a film and that force generation be depicted pretty well, but, of course, the movie took liberties, which is to be expected.  Anyhow, that is my brush with Hollywood until my daughter graduates and starts making movies there.