ISA Tips: SF, Some Not 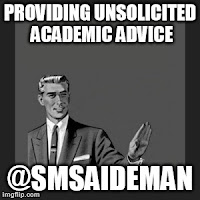 Given how often we have been to San Francisco lately for APSAs and ISAs, we probably should know by now all the places to eat and drink and such.  But my memory is lousy, so I will focus on mostly on some things to keep in mind as one gets on a plane or train or car or boat to get to the International Studies Association meeting.*


* When I was trying to get to Seattle last summer for a vacation, the planes did not go where they were supposed to, so we had to drive the last leg. As a result, I am open to all forms of travel as being possibilities these days.

I was inspired to write this as I saw a bunch of tweets fly by about presentations and discussanting and such, so:

Paper and Presentation Stuff:
Discussant (I have said some of this before):
Chair:
What else is there to an ISA?

I am sure there is other stuff to think about, so remind me what I have forgotten.  If you have good SF tips, share them.
Posted by Steve Saideman at 8:44 PM

Well said and necessary on every count. While San Francisco is convenient for me and I have family there, ISA and APSA have been there too often in the past few decades. (My first ISA meeting, 50 or so years ago was in San Francisco; I like the city, but enough already.)

All of the points for presenters, discussants and chair are important and, again, necessary to mention and repeat, repeat, repeat. I would make explicit something you note in the comment for discussants, but for all panelists, really: use any opportunity that arises to mentor younger scholars. It is almost a moral obligation for those of us who benefitted from helpful comments and suggestions from senior scholars when we were beginning to do the same. It may not be appreciated on the spot but may make a difference later.