Los Angeles: Lessons Learned with and without The Heir

Yes, we had fun at Universal, but then we had to go and try out other parts of LA.  So, yesterday, we visited downtown and the Griffith Observatory.  Driving around LA is like walking around Boston as I knew Boston from the Robert B. Parker Spenser novels, and LA seems familiar thanks to Michael Connelly's Bosch books--we saw Angel Flight and have been driving past Echo Park, for example.  That I happened to drive through Florence and Normandie after picking up our rental car--well, that was on google maps.

Anyhow, our targets downtown were the Central Market and the Last Bookstore.  Yum and wow.  We went for Salvadoran food, since we can't get that in Ottawa (afaik).  The bookstore was pretty amazing, both for how much it stocked and for some of the decorations:

We then went to the Griffith Observatory where I learned many things: 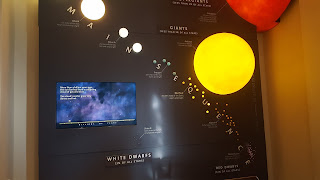 Today, we started with a great brunch at an apparently famous place: Squirl.  No squirrels were served, but I had french toast that rivaled the best I had in Tokyo.  We went from there to the LACMA--Los Angeles Country Museum of Art.  Lots of interesting stuff, including a 3-D exhibit that nicely noted the boom/bust waves:

Then we went to the La Brea Tar Pits which were next door.  I had always wanted to see them, and it was very interesting.  Traumatic at first, but interesting: 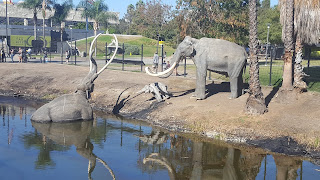 This depiction of a mother mammoth dying while dad and kid looked on made Mrs. Spew sad.  More interesting--that this place was the final resting place of so many Dire Wolves.  Yes, Dire Wolves--George RR Martin didn't make them up.  A thousand or so were found here, as they apparently tried to take advantage of trapped animals and became trapped themselves.  Hence this collection of skulls: 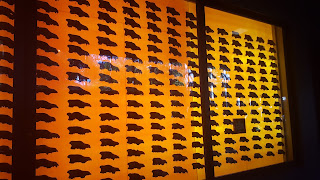 We then headed to the Grove for shopping and dinner at the Farmers' Market.  What else did I learn? 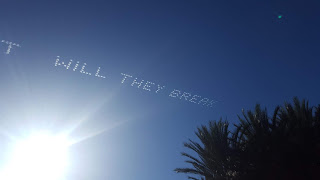 Anyhow, we have one day left, and still much good food to find and tourism to enjoy.