Butterbeer Revelations Amid the Sunshine

Have I said how much I love LA?  Because my daughter works full-time, Mrs. Spew and I spent our first day in LA at Universal Studios.  We had a heap of fun, doing every attraction and ride except the kids' splashzone and the Olivander wand show (long line, not that interesting, did it before).  It was our first time back at Harry Potterland since we sold the house in Montreal.

The changes in the park had nothing to do with HP, as the HP stuff remained mostly the same--better merch, some better candies in HoneyDukes, but the rides were the same.  Three Broomsticks was not crowded.  Indeed, we probably worried too much about crowds.  We stayed at related hotel to get into the park early, and we bought express passes.  Both were handy, but not crucial.

The big difference?  No more  Marvel.  In 2012 in Florida, the Spider-man ride was the super-cool 3 or 4D ride.  This time, Transformers, and it was just not as good.  No pics with Captain America either.  The Simpsons ride was still as fun, and we had forgotten how fast the Mummy ride accelerates.  The Despicable Me ride was new and fun, as was the Kung Fu Panda show.  Each one required at least some water thrown at the riders, just to give each ride that extra dimension. 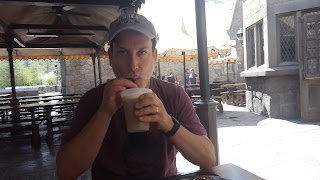 Last time, we were pretty sure that frozen butterbeer was superior to cold butterbeer, but I think I have to change my mind on that.  Yummy, either way.  The Cauldron Cake was just a cupcake in a cauldron.  We definitely need to go back to Orlando since they doubled the HP stuff with material from the last three books--a Gringotts ride, as we predicted. 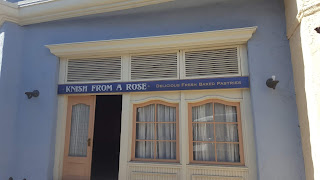 We did the Studio Tour, which we did the last time we were here.  They changed one of the events in the ride to go with Fast and Furious, but I was more excited to see some of the Good Place set.  The tour was also frustrating as our tram broke down.  We got pushed up a hill or two by a tow truck.  Also, being in the front of the second car meant we couldn't hear much of the narration--why haven't they gone electric?  It would also make the place quieter for filming.


Because it is Halloween season, they had stuff set up for evenings of frights. We didn't pay the extra ticket price to stick around.  But it did help to explain things like clowns on the War of the World's set:

The Waterworld show was more realistic now than the movie was then--too much climate change.  It was a very good show--heaps of cool action. 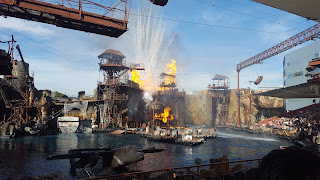 Yes, we bought a heap of merch for ourselves and our friends.  A great start to our trip, which, of course, began with a taco truck: 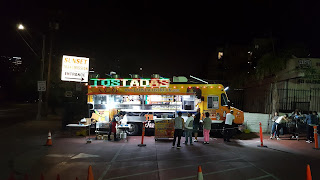