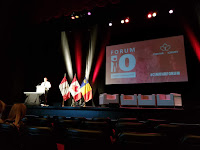 The Canadian Institute for Military and Veteran Health Research started out as a partnership and then took off.  It is a network of doctors, scientists, military folks, government officials, and others who seek to understand the health challenges facing active members of the Canadian Armed Forces, veterans, and their families.  The CDSN Knowledge Mobilization Coordinator (podcast producer extraordinaire Melissa Jennings) gave me a "no, duh!" kind of look when I told her that CIMVHR (along with TSAS) inspired the original thinking and design of the CDSN.  CIMVHR is a CDSN partner, so Melissa and I attended the first day of their Forum in Gatineau at the casino on the other side of the river from Ottawa.

CIMVHR is simply the best bet (yes, doubling down on the casino thing) in Canada, as it has funded, supported, and disseminated a wide variety of research as you can see here: 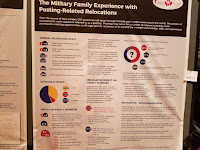 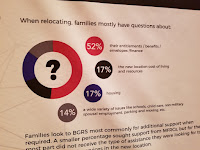 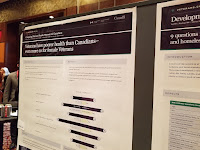 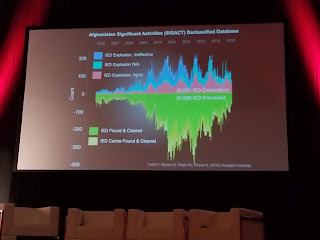 This morning had a great talk by Senior Epidemiologist Robert Hawes that made me reflect on my trip to Afghanistan in December 2007.  How so?  He talked about merging a bunch of different data, and showed that IED's were the major source of casualties.  I was not surprised by this, but hadn't realized when the lines split between improvised explosive devices and more ordinary forms of violence--bullets/artillery, etc.  The split happened really after 2007.  This was striking to me as my visit in December of 2007 had as a constant theme the IED threat.  We had briefings with those seeking to combat IEDs and such.  However, as the figure also shows, the efforts to defeat IEDs escalated and was quite successful (the green in the figure compared to the red). 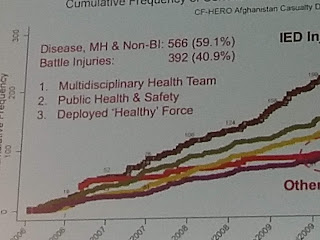 The figure that showed the split also had three conclusions that were interesting: that given the nature of the various forms of harm, including mental, the health team has to be interdisicplinary; that few of the deaths but lots of the wounded were caused by safety issues, not the adversary; and a healthy force is more resilient than one that is already facing health challenges.

I couldn't stay long because of other commitments, but I learned alot from the poster presentations (see above), from this one talk, and from how CIMVHR does its business--so very well. So very proud of this CDSN partner.  Keep on keeping on!

Posted by Steve Saideman at 5:47 PM