This morning, twitter got distracted from the Nationals winning the World Series (which is what happens when the crowd boos Trump) by the announcement that the armored unit going to Syria is a National Guard unit. The basic conversation is between those saying WTF to those saying it is normal since the NG and Reserves have been rotating units to be the one squatting Kuwait, and they are the closest to the area.  Of course, this simply invokes the classic question of just because you can do something does not mean you should do it. 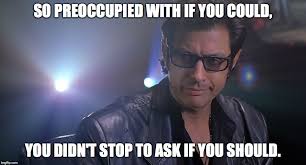 So, I recalled that when I was on the Joint Staff in 2001-2002, the first Reserve unit had just been deployed to Bosnia, and there was much reluctance to do the same in Kosovo since things were far less settled there.  Of course, the next 15 years of forever wars meant that the US had to send National Guard and Reserve units to Iraq and Afghanistan, but as wise folks pointed out, our current OPTEMPO (pace of operations) is not so high that we need to use reservists for this kind of stuff.

I said this was the seventh dumbest thing about this mission, so let's see if I can find six dumber aspects
Did I cheat?  Did I miss any?

Maybe Obama was overly risk-averse, but I still think the mantra of "Don't do stupid shit!" is a good one.  Obviously, it has been forgotten not just by this White House but also by this Pentagon.