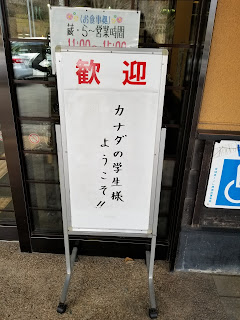 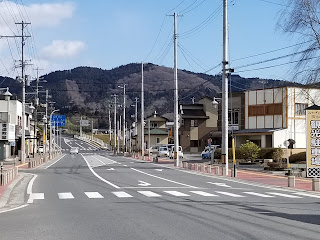 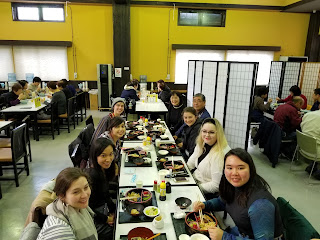 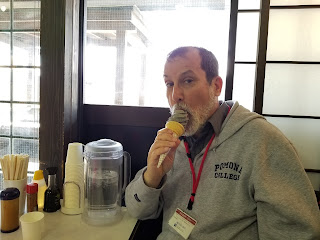 I had been wondering what I would be doing when the students were doing home stays.  Today, I found out: a bit of police patrol and also some fire alarm.  Huh?  That I was involved in some oversight efforts and served as a semi-quick reaction force if needed.  This morning, our guides (Yuki and Kato) and I went to three homes to see how the three families and three sets of students were doing. I was also available (and remain so) if anyone needs help (which is a bit frustrating since the ski mountains nearby are calling to me).  After the homestays, we had lunch (where we bumped into two sets of students/hosts and saw a third combo) and then walked around Tome, a small town amid the farms, and saw another set of students.  We only missed one set in purposeful and accidental oversight.  So, below are pics and captions explaining what I saw.

Our first stop was at the home where Tamsyn, Diana, and Ashley were staying.  They had tried on kimonos (the pics were great, but I didn't get any) before we arrived and were doing origami.  The fun part was that they shared their knowledge of "cootie catchers" with their hosts.  We had some funky tea while we were there. 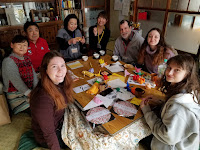 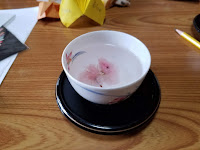 Our second stop featured a shiba that stole our hearts and some early morning sake that stole my brain cells.  Oh and Yoad, Jason, and Chris (I think--I have never been great with names) The father was most generous, insisting that the regional tradition was to always drink not one but two (big) cups.  Yum.  It is good to be the king sensei as I was given the sake to drink along with father: kompai!  The house is a couple of centuries old and had an attic where persecuted Christians could hide.  A bit of IR was dropped during the home stays: residents of Tome had bad harvests and went to make money in .... Canada.  They were successful, sending remittances back to their families here. Then they came back, and then a bank failure made them all less rich.

Our last home visit saw Gabe and Alex about to engage in some lumberjacking--yep, the Canadians were moving around some firewood. Lots of wood burning stoves in our visits today.  For me, the highlight was that their host had carved a funky spider-man out of styrofoam.  His entire farm was set up as an experience cafe for kids (see the ad below).  Kind of reminded me of ninja school near Mount Fuji. 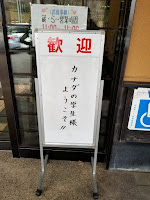 After the last visit, we went into town for lunch at a restaurant/shop/tourism info center, and they had correctly guessed that we Canadians would be visited, as is obvious by this sign (ok, trust me...ok, trust Yuki and Kato).  Here, we bumped into two of our groups, a third passed by while we were eating.  The food was plentiful and excellent and I managed to avoid another ice cream mishaps with my black sesame ice cream cone (not my favorite flavor).  I then bought souvenirs before we went and checked out a former samurai hq.

Posted by Steve Saideman at 4:50 AM

I am glad to know that you and the students from Carleton and uOttawa are enjoying in Tome city. I wonder if Miyagi has green bean flavoured ice cream.
My recommendation for what to buy at Sendai Station; Hasekura yaki - butter flavoured sweet bun with semi-sweet white bean paste and walnut bits !